By: Composed by Rafael Alvarez Ovalle Arranged by Keith Terrett
For: Brass quintet
This music is in your basket
View basket
Loading... 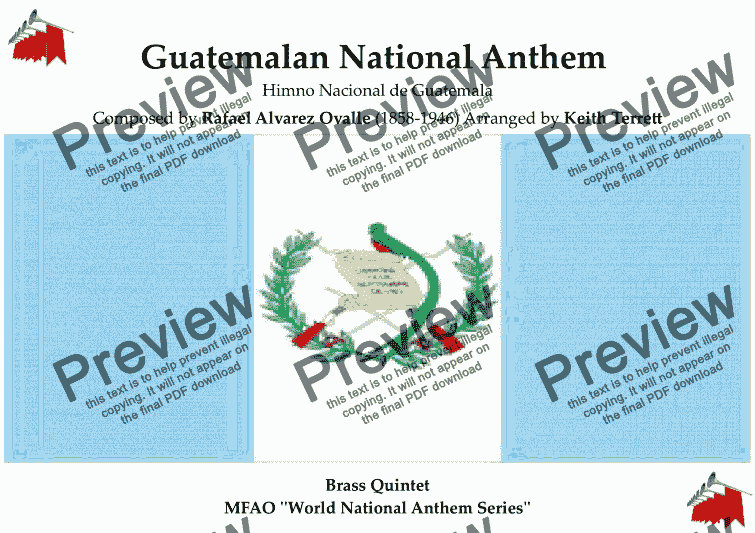 By: Composed by Rafael Alvarez Ovalle Arranged by Keith Terrett
For: Brass quintet

Composer
Composed by Rafael Alvarez Ovalle Arranged by Keith Terrett
Arranger
Keith Terrett
Publisher
Music for all Occasions
Difficulty
Moderate (Grades 4-6)
Duration
1 minute
Genre
Classical music
License details
For anything not permitted by the above licence then you should contact the publisher first to obtain permission.

Written in response to an 1887 contest calling for a national anthem to be adopted, the winning entry was not proclaimed until 1896, the first ever performance of the anthem took place during a lyric-literary meeting taking place at the Colon Theater, the night of Sunday 14 March 1897, as one of the main events of the Central American Exposition, and the author of the music was decorated with a gold medal and honor diploma. (Ovalle had been known previously for setting to music “Himno Popular” (The People’s Anthem) by the poet Ramón P. Molina. It is unclear whether the music used for Ovalle’s work was the same as the music that was submitted for the national anthem competition.) The author of the lyrics, however, was submitted anonymously, it was not until 1911, when it was discovered that the author was the Cuban poet Jose Joaquin Palma, who on his deathbed was honored with a silver wreath placed on his head, while outside the public and the bands sang the Himno Nacional.

The original lyrics were modified slightly in 1934 by Professor Jose Maria Bonilla Ruano, a Spanish grammar scholar. Some verses were softened in their bloody context while others were enhanced in their poetic beauty.

The anthem has four verses (including four separate choruses at the end of each verse). Unlike many other nations with multi-verse anthems, all four verses are official and sung in Guatemala. The anthem is sometimes erroneously called “¡Guatemala Feliz!” (Guatemala, Be Praised) from the opening words of the anthem, but officially there is no title and is simply referred to inside the country as “Himno Nacional”.