By: Perucho Felipe Figueredo (1818-1870)
For: Brass quintet
This music is in your basket
View basket
Loading... 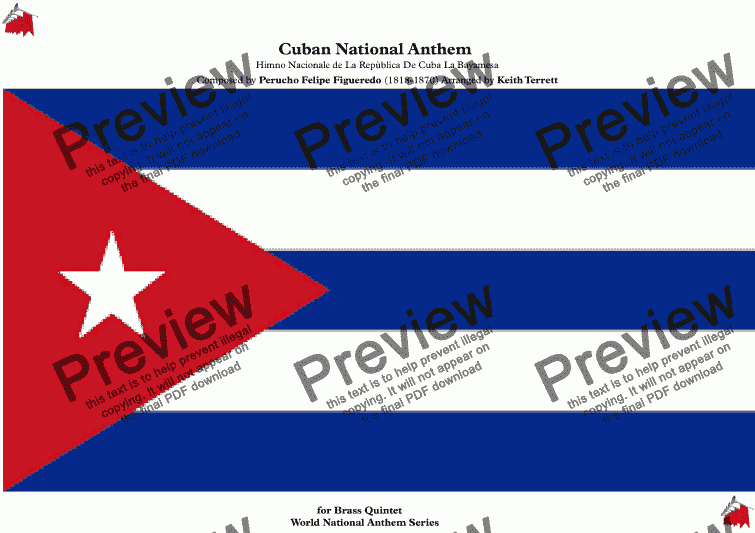 Composer
Perucho Felipe Figueredo (1818-1870)
Year of composition
1867
Arranger
Keith Terrett
Year of arrangement
2014
Publisher
Music for all Occasions
Difficulty
Moderate (Grades 4-6)
Duration
1 minute
Genre
World music
License details
For anything not permitted by the above licence then you should contact the publisher first to obtain permission.

An arrangement of the Cuban National Anthem for Brass Quintet with optional percussion parts. There are also versions for string orchestra & full orchestra available in my stores.

On October 20, 1868, the Cuban forces obtained the capitulation of the Spaniard authorities in Bayamo, the jubilant people surrounded Figueredo and asked him to write an anthem with the melody they were humming. Right on the saddle of his horse, Figueredo wrote the lyrics of the anthem, which was longer than the current official version. Figueredo was captured and executed by the Spaniards two years later. Just before the firing squad received the Fire command, Figueredo shouted the line from his anthem: Morir por la Patria es vivir. Officially adopted in 1902, the anthem was retained after the revolution of 1959. The arrangement commonly used, without credit in Cuba, is believed to be that of José Norman, author of Cuban Pete [1]. The Cuban composer Antonio Rodriguez-Ferrer, was the author of the musical introductory notes to the Cuban national anthem. In addition to the Himno de Bayamo, there are two other well-known Cuban songs called La Bayamesa. The first Bayamesa was composed in 1851 by Carlos Manuel de Céspedes and José Fornaris at the request of their friend Francisco Castillo Moreno, who is sometimes also credited with the lyrics. Many years later, in 1918, the composer and trovador Sindo Garay, from Santiago de Cuba, composed a song that he called Mujer Bayamesa; popular usage shortened the title to La Bayamesa.