By: Composed by Philip Gbeho (1904-76) Arr:Keith Terrett
For: Brass quintet
This music is in your basket
View basket
Loading... 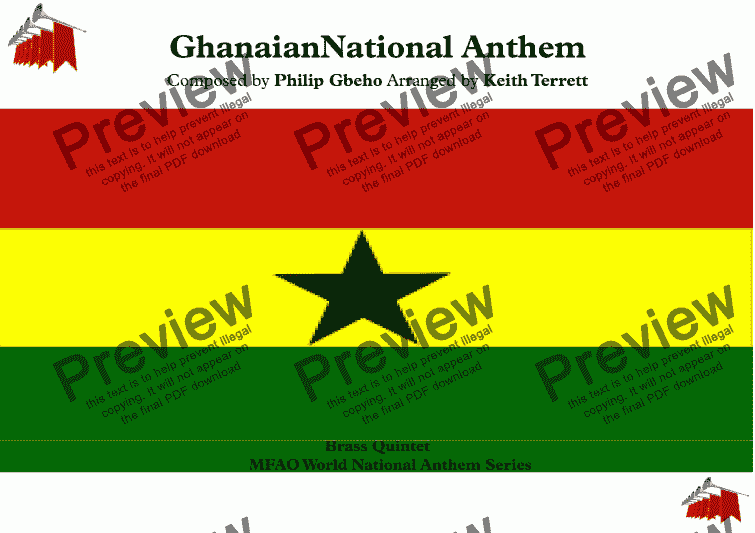 By: Composed by Philip Gbeho (1904-76) Arr:Keith Terrett
For: Brass quintet

Composer
Composed by Philip Gbeho (1904-76) Arr:Keith Terrett
Arranger
Keith Terrett
Year of arrangement
2014
Publisher
Music for all Occasions
Difficulty
Easy (Grades 1-3)
Duration
1 minute
Genre
World music
License details
For anything not permitted by the above licence then you should contact the publisher first to obtain permission.

The original words to this anthem, adopted upon independence in 1957 and written by the composer Philip Gbeho, were changed upon the declaration of a republic in 1960, and when the government was overthrown six years later, the current lyrics were adopted after a contest was held for new lyrics.

Philip Comi Gbeho (14 January 1904 – 24 September 1976) was a Ghanaian musician, composer and teacher. He was best known for his composition of the Ghana National Anthem. He was instrumental in the establishment of the Arts Council of Ghana and was a Director of Music and conductor of the National Symphony Orchestra in Ghana.

Philip Gbeho was born on Saturday, 14 January 1904, in Vodza, a fishing village in the suburb of Keta in the Volta Region. He attended the Keta Roman Catholic Boys School where he was introduced to the organ, which he learnt to play in a short time and even became a pupil organist until he left the school.

His father, Doe Gbeho, was a fisherman. His mother, Ametowofa, from the Gadzekpo family, was a trader who was also reputed to have musical talent and was a leader of the female singers in the village drumming and dancing group.

In January, 1925 Philip Gbeho gained admission to the newly opened Achimota Teacher Training College in Accra. While studying to become a teacher, he took advantage of the tremendous facilities that the college offered in music to upgrade his own knowledge and practice of music. He was a pianist and violinist, both of which he excelled in because he developed his skills under the tutelage of expatriate teachers in Achimota College who were also very versatile in music.

Gbeho was also an accomplished indigenous musician, ever since childhood. He played nearly all the drums of the Ewe Agbadza orchestra as well as teach traditional Anlo songs. Achimota College encouraged the performance of traditional drumming and dancing from all parts of the country and so Gbeho had the opportunity of keeping up with his indigenous music by performing and teaching it.

Upon graduating as a teacher in December 1929, Gbeho returned to Keta to teach at the Roman Catholic Boys School. Since he was imbued with a strong passion for music he immediately resumed the role of organist at the St. Michael’s Catholic Cathedral in Keta where he also founded the St. Cecilia’s Choir (which is still in existence) and brought it to an unusually high performance standard in the District. He also started an informal school of music in Keta that prepared students for the external examinations of London’s Victoria College of Music.

Philip Gbeho’s indefatigable efforts in music in and around Keta caught the attention of the authorities of Achimota College who invited him in 1938, when an assistant music master was needed, to teach music at the college. Gbeho accepted and began a new career as a music master at Achimota that same year.

In 1949, he was offered a one-year scholarship by the British Council to study for the Licentiate diploma at the Trinity College of Music in the United Kingdom.

While studying in London, Gbeho soon caught the attention of the cultural community of that city by holding frequent lectures and demonstration sessions on African, especially Gold Coast, music. His dancing group, made up essentially of West African students, soon became very popular and performed in many halls, parks and on British television. Gbeho also became a regular broadcaster on the BBC overseas radio programmes, especially the then very popular "Calling West Africa" programme.

In 1950, Gbeho was granted a Gold Coast government extension scholarship to continue to study at Trinity College of Music for the Graduate of Trinity College (GTCL) degree in music. He continued simultaneously with his lectures, broadcasts and African music performances at various venues in London, including the Artists International Centre in Piccadilly, the West African Students’ Union (WASU) Secretariat, Strawberry Hill College, the Royal Empire Society, the Royal Geographical Society, and Royal Kew Gardens.

At the same time, Gbeho also took the exams of the Royal Academy of Music privately and earned himself the L.R.A.M in the teaching of music.

He returned to the Gold Coast upon graduation to resume the teaching of music at the Achimota Secondary School. By now, his imagination had been fired sufficiently by the cultural experiences in the United Kingdom to embark on a campaign to popularize indigenous music in schools and colleges all round the country, but especially in the missionary schools. He also became a strong advocate of the establishment of an Arts Council and the building of a National Theatre. He also gave several talks on national radio in which he led a renaissance in traditional music in the face of obstacles placed in its way by colonial missionary overlords.

On his return to Ghana from his studies abroad, Gbeho dedicated his life to the teaching of music in Achimota School and, more importantly, to the reawakening of his countrymen and women about their cultural heritage, especially in music. He, together with his colleague teachers and friends like Ephraim Amu, fought hard to have the teaching of indigenous music inculcated n pupils especially in the first and second cycle schools. Even though this put him on a collision course with the Missions, which associated indigenous music with pagan worship, he persevered in his bid to gain acceptability and respect for African music and culture generally.

He gave several talks on Radio Ghana on indigenous music and the need to preserve it. “Think well of these things” was the regular phrase with which he often concluded his broadcast. The broadcast helped in leading a renaissance in traditional music in a country that had been brainwashed by its colonial overlords to regard their own culture as Primitive. In the promotion of Ghanaian culture, Gbeho was outstanding.

When in 1954, the government decided on setting up a statutory body to “foster, improve and preserve the traditional arts and culture of the Gold Coast”, Gbeho was appointed the Chairman of the Interim-Committee for the Arts Council of the Gold Coast.

The Committee through its regular arts and crafts exhibitions and regional festivals organized at Ho, Tamale and Cape Coast whipped up interest in Ghanaian culture. The first National Festival of the Arts took place in Accra in March 1957 – the week of Ghana’s independence. As part of the festival, 269 exhibitions were mounted from 27 February to 9 March at the Information Services Department show-room in Accra. A pageant which included the La Kpa dance of the Gas, the Akan Fontomfrom, the Yewe and Atsiagbekor of the Ewes, among other traditional dances, were also put up. Three other performances staged at the pageant depicted the installation of an Akan Chief, the Birth of Highlife music and a visit at the turn of the century of a District Commissioner. Two plays, Zuchariah Fee in English and Papa Ye in Fante, were also presented by two amateur groups. Over 15,000 people watched the cultural dancing and drumming performed by 500 artistes on the night of Ghana’s independence. Credit for the successful organization of the cultural events went to Gbeho, for he traveled all over the country to pick the best 500 dancers and the possible dances for presentation.

The other notable contribution of Philip Gbeho to the music and cultural life of his country was the creation of a National Symphony Orchestra and Choir to promote the understanding and enjoyment of western classical music.

On the eve of Ghana’s Independence celebrations, Gbeho won an open competition to write the National Anthem for the newly independent Ghana. His composition remains the national anthem of Ghana until now.

The music for the new anthem to replace "God Save the Queen", which hitherto had been the country’s anthem, was written by Philip Gbeho. His piece was one of numerous entries that had been presented to a National Anthem Selection Committee. Out of those entries, four were short listed and played regularly on radio for listeners to indicate their preferences. The choice was overwhelmingly in favour of Gbeho’s composition.

Need an anthem fast? They are ALL in my store!All my anthem arrangements are also available for Orchestra, Recorders, Saxophones, Wind, Brass and Flexible band. If you need an anthem urgently for an instrumentation not in my store, let me know via e-mail, and I will arrange it for you FOC if possible! keithterrett@gmail.com