By: Arranged by Keith Terrett
For: Concert band / wind band
This music is in your basket
View basket
Loading... 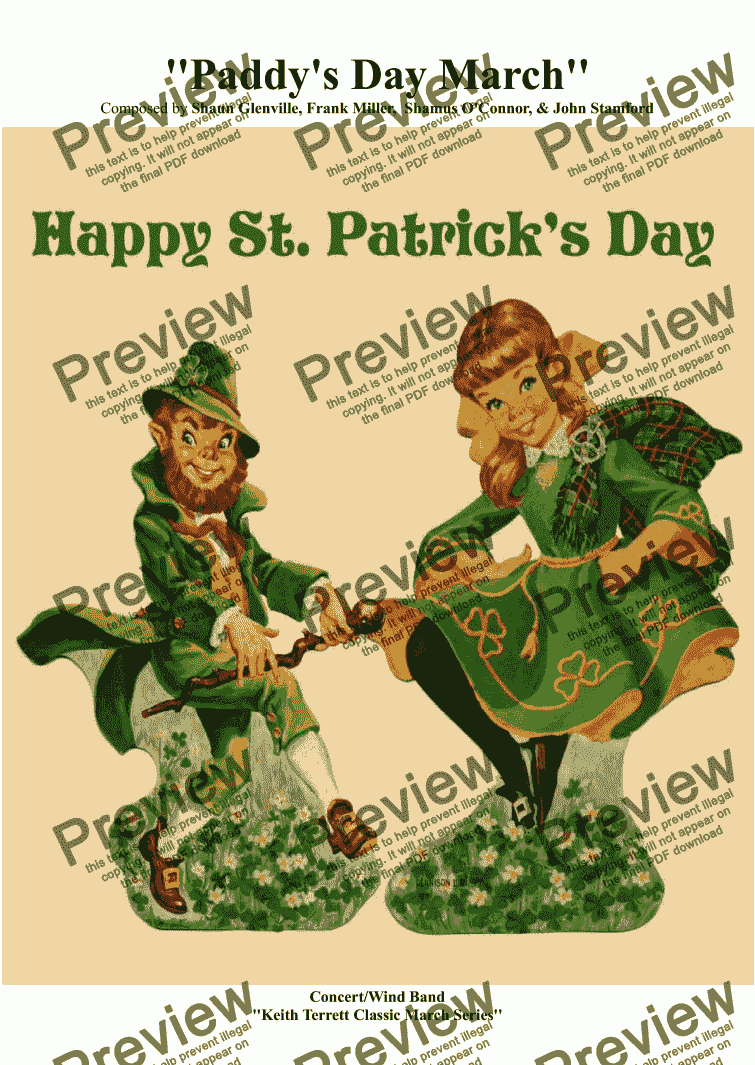 By: Arranged by Keith Terrett
For: Concert band / wind band

Composer
Arranged by Keith Terrett
Arranger
Keith Terrett
Year of arrangement
2008
Publisher
Music for all Occasions
Difficulty
Moderate (Grades 4-6)
Duration
3 minutes
Genre
Classical music
License details
For anything not permitted by the above licence then you should contact the publisher first to obtain permission.

A super march for St. Patrick’s Day arranged for Concert Band, featuring several well known Irish songs; which will get your audience dancing in the aisles such as:

If Your'e Irish Come Into The Parlour & MacNamara's Band.

Saint Patrick’s Day or the Feast of Saint Patrick (Irish: Lá Fhéile Pádraig, "the Day of the Festival of Patrick") is a cultural and religious holiday celebrated annually on 17 March, the death date of the most commonly-recognised patron saint of Ireland, Saint Patrick (c. AD 385–461).

Saint Patrick’s Day was made an official Christian feast day in the early seventeenth century and is observed by the Catholic Church, the Anglican Communion (especially the Church of Ireland), the Eastern Orthodox Church and Lutheran Church. The day commemorates Saint Patrick and the arrival of Christianity in Ireland, as well as celebrates the heritage and culture of the Irish in general.Celebrations generally involve public parades and festivals, céilithe, and the wearing of green attire or shamrocks. Christians also attend church services, and the Lenten restrictions on eating and drinking alcohol are lifted for the day, which has encouraged and propagated the holiday’s tradition of alcohol consumption.

Saint Patrick’s Day is a public holiday in the Republic of Ireland, Northern Ireland, Newfoundland and Labrador and Montserrat. It is also widely celebrated by the Irish diaspora around the world; especially in Britain, Canada, the United States, Argentina, Australia and New Zealand. For more of my original music, great arrangements and all the national anthems of the world, check out my on-line stores:

Thanks to P.B. Smith for the inspiration!

Need a great Irish march for the 17th of March?

Look no further, this arrangement of popular Irish songs is really something!

Paddy's day rocks from the beginning to the end.