By: Composed by Pierre Marie Coty & Pierre Michel Pango Arr:Keith Terrett
For: Brass quintet
This music is in your basket
View basket
Loading... 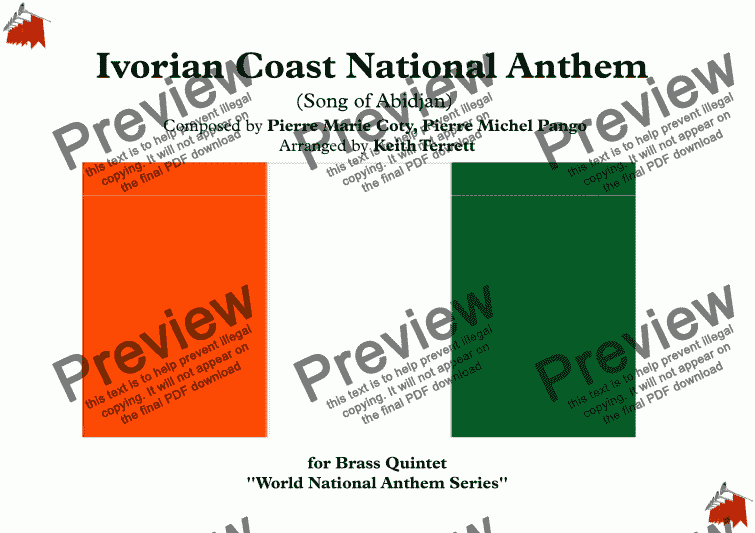 The national anthem of The Ivory Coast arranged for Brass Quintet.

"L’Abidjanaise" (Song of Abidjan) is the national anthem of Côte d’Ivoire. Adopted under law n°60–207 on 27 July 1960, its status as national anthem is enshrined in the constitution’s 29th article. It takes the form of a lyric and very patriotic poem, using inspiring images expressing the greatness of the Ivorian soil and values such as hope, peace, dignity and the "true brotherhood".

Adopted in 1960 at the country’s independence, the song of Abidjan remains the national anthem of Côte d’Ivoire, even though the capital city is now Yamoussoukro. This hymn is strongly tinged with patriotism and influenced by religion. The lyrics are from ministers Mathieu Vangah Ekra and Joachim Bony. The music has been composed by abbots Pierre-Marie Coty alongside Pierre-Michel Pango, taking La Marseillaise as model.

Between 2007 and 2009, and under the leadership of Laurent Gbagbo, there was a project of replacing the Song of Abidjan by the Ode to the homeland as national anthem. This Ode has been composed in 2002 after the start of the Ivorian civil war, and was selected by contest in 2003. The Ode to the homeland was sung by supporters of the now former head of state and broadcast on the RTI’s television network instead of the Song of Abidjan until 2007, even though it remained, according to the constitution, the country’s national anthem. However, the replacement project was not given any future.