By: C. Van Roland Edwards (1912-85) Arr:Keith Terrett
For: Brass quintet
This music is in your basket
View basket
Loading... 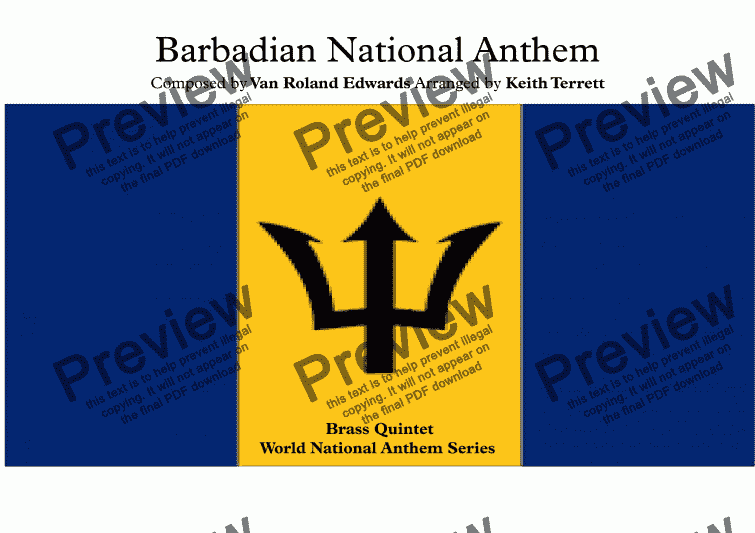 Composer
C. Van Roland Edwards (1912-85) Arr:Keith Terrett
Arranger
Keith Terrett
Publisher
Music for all Occasions
Difficulty
Easy (Grades 1-3)
Duration
2 minutes
Genre
World music
License details
For anything not permitted by the above licence then you should contact the publisher first to obtain permission.

The national anthem of Barbados arranged for Brass Quintet.

In Plenty and In Time of Need is the national anthem of the country of Barbados. It was written by Irving Burgie (1926-) and was composed by C. Van Roland Edwards (1912–1985). As one part of the West Indies Federation from 1958-1962, Barbados’ anthem was supposed to be Forged from the Love of Liberty (which is currently the national anthem of Trinidad and Tobago), however the current anthem was created with Barbados’ moves toward full independence. This song was then adopted by Barbados when it became independent in 1966.

The Government of Barbados outlines the following rules for the National Anthem:

1. Whenever the National Anthem is played all civilians present should stand at attention, men with bared heads. Persons in uniform should act in accordance with instructions. Anthem Application 2. Normally one verse only and the chorus will be played. Where a shortened version of the National Anthem is played, it shall consist of the first twelve bars of the verse and the last four bars of the chorus.

The National Anthem shall be played:

(a) for the purposes of a salute on ceremonial or official occasions, on the arrival and departure of: (i) the Governor General. (ii) the Sovereign or a member of the Royal family, (iii) a foreign Sovereign, Head of State or member of a reigning foreign imperial or Royal Family, (iv) Governors-General of Independent Commonwealth countries. (v) Governors of the Associated States, and (vi) Governors, High Commissioners of Officers administering the Government of a dependent territory within the Commonwealth (b) at the beginning of all public performances in a cinema house. 3. The National Anthem may be played (a) at the completion of any public function, or (b) when toasts are proposed at official functions. Rules in usage

4. The National Anthem should not be parodied in verse or in song neither should it be played in any tempo other than that officially recognises (eighty-eight crochets to the minute). Particularly, the tune should not be used as a dance number or for the purposes of advertisement. 5. When more than one anthem is played the Barbados anthem should be played last.