By: C. Hubert H. Parry arr. Keith Terrett
For: Brass quintet
This music is in your basket
View basket
Loading... 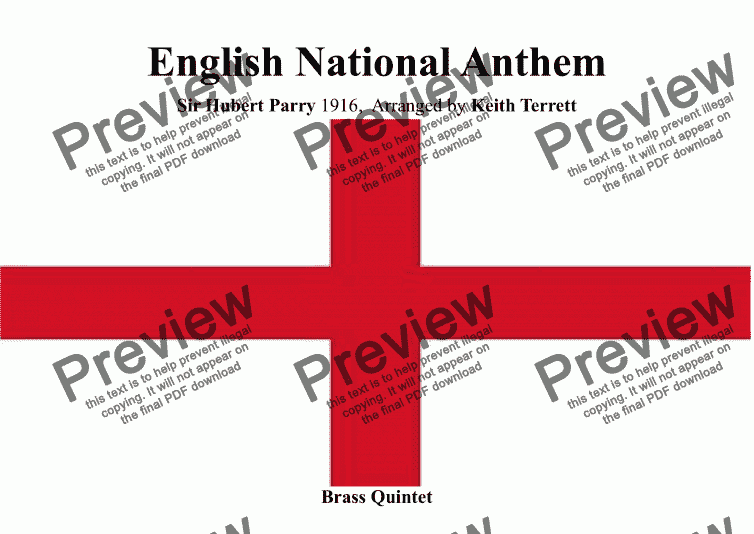 Composer
C. Hubert H. Parry arr. Keith Terrett
Publisher
Music for all Occasions
Difficulty
Moderate (Grades 4-6)
Duration
2 minutes
Genre
Classical music
License details
For anything not permitted by the above licence then you should contact the publisher first to obtain permission.

An arrangement of the English National Anthem for Brass Quintet.

While England does not have an official national anthem, there are many songs which are considered to fill such a role. In most of the national sporting fixtures ’God Save the Queen’ is used.

The best-known version of William Blake’s poem "And did those feet in ancient time" is the song "Jerusalem", with music by Hubert Parry, which was orchestrated by Edward Elgar in 1922 for a large orchestra at the Leeds Festival. Upon hearing the orchestral version for the first time, King George V said that he preferred that "Jerusalem" replace "God Save the King" as the national anthem. "Jerusalem" is also, as with "Land of Hope and Glory" performed at the annual Last Night of the BBC Proms. It was used as a campaign slogan by the Labour Party in the 1945 general election when Clement Attlee said they would build "a new Jerusalem". The song is also the unofficial anthem of the Women’s Institute, and historically was used by the National Union of Suffrage Societies. It has also been sung at conferences of the Conservative Party.

It is frequently sung as an office or recessional hymn in English cathedrals, churches and chapels on St George’s Day. The hymn is also sung in some churches on "Jerusalem Sunday"[citation needed], a day set aside to celebrate the Holy city of Jerusalem in Anglican Churches throughout the world and even in some Episcopal Churches in the United States. However some clergy in the Church of England have and refused to allow it in their churches on the grounds that it is too nationalistic and is not a prayer to God.

There have been calls to give "Jerusalem" official status. In 2000 a rendition of "Jerusalem" by Fat Les was adopted by the English Football Association as the England football team’s official song for the UEFA Euro 2000 competition. Jerusalem has been the ECB’s official hymn since 2003, being played before the start of play each day of home test matches. Although God Save the Queen was the anthem sung by England players before games at ICC events and recent Ashes series.