An orchestration by Mark Starr of Mozart’s Sonata for Piano 4-Hands, KV 521

By: W. A. MOZART (arranged by Mark Starr)
For: Orchestra + solo Woodwind
This music is in your basket
View basket
Loading... 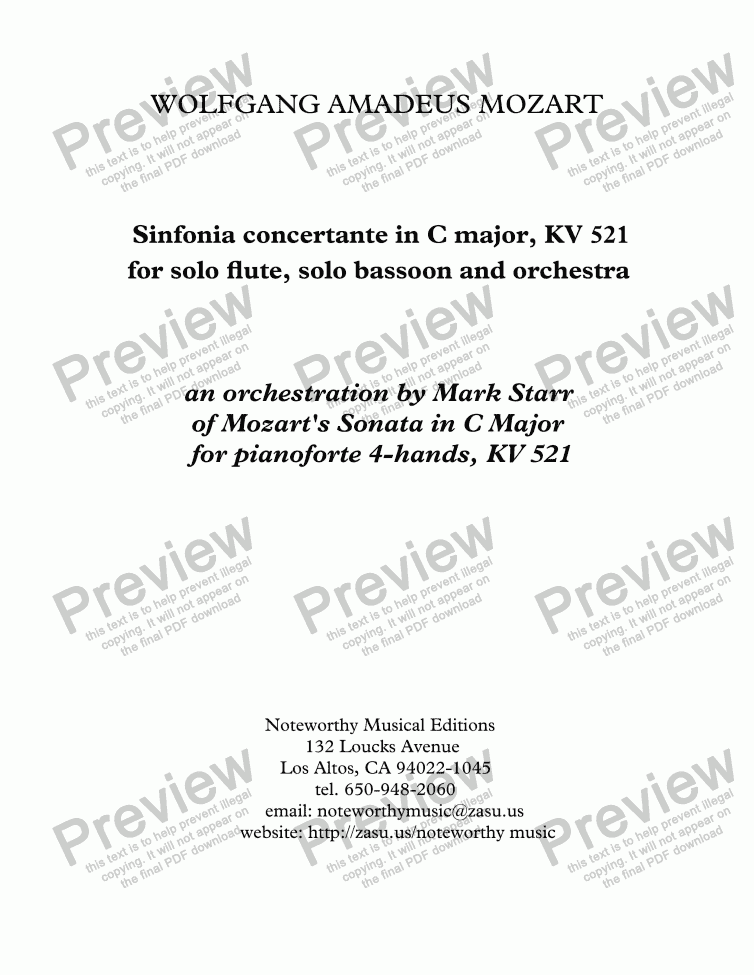 An orchestration by Mark Starr of Mozart’s Sonata for Piano 4-Hands, KV 521

By: W. A. MOZART (arranged by Mark Starr)
For: Orchestra + solo Woodwind

Composer
W. A. MOZART (arranged by Mark Starr)
Year of composition
1787
Arranger
Mark Starr
Year of arrangement
2014
Publisher
Noteworthy Musical Editions
Difficulty
Difficult (Grades 7+)
Duration
9 minutes
Genre
Classical music
License details
For anything not permitted by the above licence then you should contact the publisher first to obtain permission.

A full set of orchestral parts (together with the conductor’s score and the combined solo parts) is available on rental for live concert performances and commercial recordings directly from Noteworthy Musical Editions (noteworthymusic@zasu.us). Please inquire about rental prices and performance fees.

My reduction for solo flute, solo bassoon and piano is available for purchase on amazon.com (bound with cover); and on scoreexchange.com (unbound with a title page.) This piano reduction is suitable for chamber music performances as a trio. All performances and recordings of this arrangement – including both the version for flute, bassoon and piano and the version for flute, bassoon and orchestra – must be licensed by Noteworthy Musical Editions. Any copying or derivatives of this arrangement is expressly prohibited.