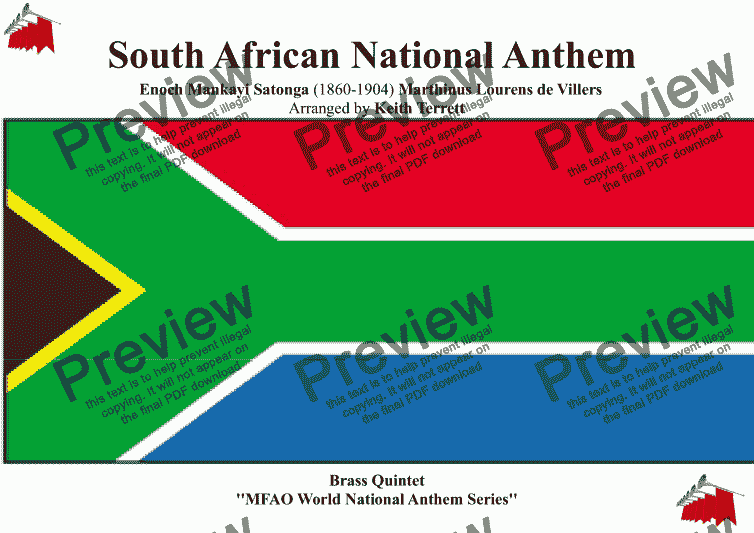 An arrangement of the South African national anthem arranged for Brass Quintet.

At the time that South Africa’s multi-racial system of government was adopted, there were two anthems in use among the people, divided by the old racial lines. “N’kosi Sikelel’ iAfrika” (God Bless Africa), written and composed by Enoch Mankayi, was popular with the black population and was used as an anti-Apartheid anthem. The white South Africans had been using “Die Stem van Suid Afrika” (The Call of South Africa) since the 1920s on an unofficial basis, and was made the country’s official anthem in 1957. Even though the latter anthem was seen as too closely tied to the apartheid system by the majority black population, it was decided in the interim to make both anthems the national anthem, “God Bless Africa” was usually played in its entirety followed by the complete “Die Stem”.

The national anthem of South Africa is unique in a couple of aspects: first of all, as mentioned above, the anthem employs five different languages in the same version of the official lyrics, secondly, by virtue of the fact that it combines two disparate pieces of music, this anthem as well as Italy’s are the only two that end on a different key than they begins with.