By: Traditional Gaelic Melody: Harmonised & arranged by Keith Terrett)
For: Concert band / wind band
This music is in your basket
View basket
Loading... 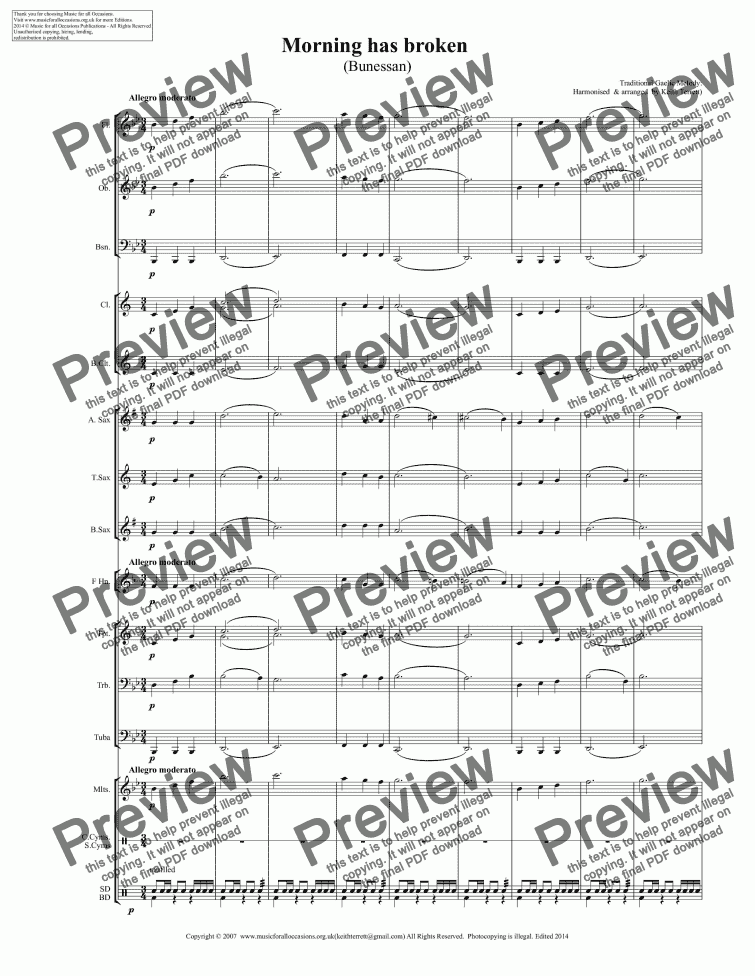 Composer
Traditional Gaelic Melody: Harmonised & arranged by Keith Terrett)
Publisher
Music for all Occasions
Difficulty
Easy (Grades 1-3)
Duration
1 minute
Genre
Classical music
License details
For anything not permitted by the above licence then you should contact the publisher first to obtain permission.

Morning has Broken (Bunessan) arranged for Young Concert Band, add your own dynamics!

Morning Has Broken" is a popular and well-known Christian hymn first published in 1931. It has words by English author Eleanor Farjeon and is set to a traditional Scottish Gaelic tune known as "Bunessan" (it shares this tune with the 19th century Christmas Carol "Child in the Manger"[1]). It is often sung in children's services. English pop musician and folk singer Cat Stevens (known as Yusuf Islam since 1978) included a version on his 1971 album Teaser and the Firecat. The song became identified with Stevens when it reached number six on the US Billboard Hot 100 and number one on the US easy listening chart in 1972.

The hymn originally appeared in the second edition of Songs of Praise (published in 1931), to the tune "Bunessan", composed in the Scottish Highlands. In Songs of Praise Discussed, the editor, Percy Dearmer, explains that as there was need for a hymn to give thanks for each day, English poet and children's author Eleanor Farjeon had been "asked to make a poem to fit the lovely Scottish tune". A slight variation on the original hymn, also written by Eleanor Farjeon, can be found in the form of a poem contributed to the anthology Children's Bells, under Farjeon's new title, "A Morning Song (For the First Day of Spring)", published by Oxford University Press in 1957. The song is noted in 9/4 time but with a 3/4 feel.

"Bunessan" had been found in L. McBean's Songs and Hymns of the Gael, published in 1900.[3] Before Farjeon's words, the tune was used as a Christmas carol, which began "Child in the manger, Infant of Mary", translated from the Scottish Gaelic lyrics written by Mary MacDonald. The English-language Roman Catholic hymnal also uses the tune for the Charles Stanford hymns "Christ Be Beside Me" and "This Day God Gives Me", both of which were adapted from the traditional Irish hymn St. Patrick's Breastplate. Another Christian hymn "Baptized In Water" borrows the tune.

Writing credit for "Morning Has Broken" has occasionally been erroneously attributed to Cat Stevens, who popularised the song abroad. The familiar piano arrangement on Stevens' recording was performed by Rick Wakeman, a classically trained keyboardist best known for his tenures in the English progressive rock band Yes.

When shaping "Morning Has Broken" for recording, Stevens had to start with a hymn which took around 45 seconds to sing in its basic form. Producer Paul Samwell-Smith told him he could never put something like that on an album, and that it needed to be at least three minutes in length, although an acoustic demo exists of Stevens playing an early version which lasts almost three minutes. Prior to the actual recording Stevens heard Wakeman play something in the recording booth. It was a rough sketch of what would later become "Catherine Howard". Stevens told Wakeman that he liked it and wanted something similar as the opening section, the closing section and, if possible, a middle section as well. Wakeman told Stevens he could not as it was his piece destined for a solo album, but Stevens persuaded him to adapt his composition. The familiar piano intro and general structure of the piece may be attributed to Stevens or to Wakeman.

In 2000, Wakeman released an instrumental version of "Morning Has Broken" on an album of the same title. That same year he gave an interview on BBC Radio 5 Live in which he said he had agreed to perform on the Cat Stevens track for £10 and was "shattered" to be omitted from the credits, adding that he never received the money either.

On his return to performance as Yusuf Islam, Stevens made a payment to Wakeman and apologized for the original non-payment, which arose from confusion and a misunderstanding on the record label's part. On a documentary aired on British television Wakeman stated that he felt Stevens's version of "Morning Has Broken" was a very beautiful piece of music that had brought people closer to religious truth. He expressed satisfaction in having contributed to this.

Reviews of Morning has Broken (Bunessan) for Young Concert Band