By: Richard Strauss (1864-1949) Arranged Keith Terrett
For: Jazz quartet
This music is in your basket
View basket
Loading... 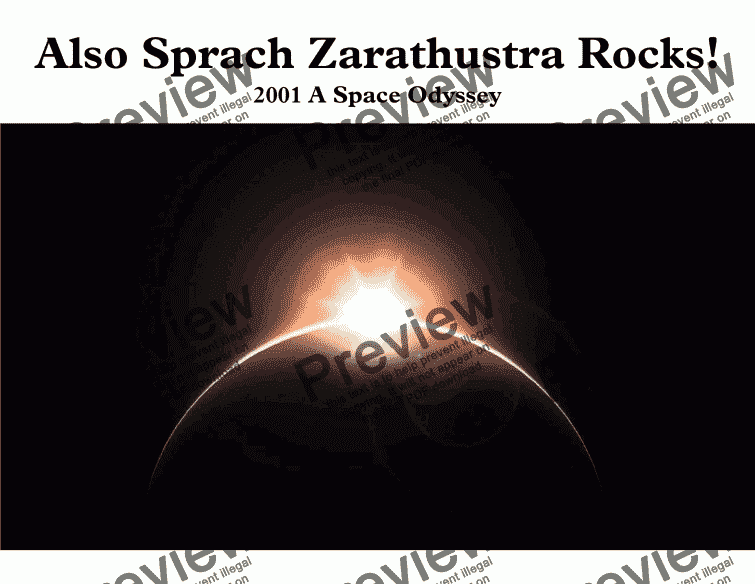 Composer
Richard Strauss (1864-1949) Arranged Keith Terrett
Arranger
Keith Terrett
Publisher
Music for all Occasions
Difficulty
Moderate (Grades 4-6)
Duration
3 minutes
Genre
Rock and Pop music
License details
For anything not permitted by the above licence then you should contact the publisher first to obtain permission.

This is the pro version, but the extreme high notes can be left out!

Also sprach Zarathustra, Op. 30 (Thus Spoke Zarathustra or Thus Spake Zarathustra) is a tone poem by Richard Strauss, composed in 1896 and inspired by Friedrich Nietzsche’s philosophical novel of the same name. The composer conducted its first performance on 27 November 1896 in Frankfurt. A typical performance lasts half an hour.

Beginning of the music:

The work has been part of the classical repertoire since its first performance in 1896. The initial fanfare – entitled "Sunrise" in the composer’s program notes became particularly well known to the general public due to its use in Stanley Kubrick’s 1968 film 2001: A Space Odyssey.oes l

The original but not my version!

The piece starts with a sustained double low C on the double basses, contrabassoon and organ. This transforms into the brass fanfare of the Introduction and introduces the "dawn" motif (from "Zarathustra’s Prologue", the text of which is included in the printed score) that is common throughout the work: the motif includes three notes, in intervals of a fifth and octave, as C–G–C (known also as the Nature-motif). On its first appearance, the motif is a part of the first five notes of the natural overtone series: octave, octave and fifth, two octaves, two octaves and major third (played as part of a C major chord with the third doubled). The major third is immediately changed to a minor third, which is the first note played in the work (E flat) that is not part of the overtone series.

"Of Those in Backwaters" (or "Of the Forest Dwellers") begins with cellos, double-basses and organ pedal before changing into a lyrical passage for the entire section. The next two sections, "Of the Great Yearning" and "Of Joys and Passions", both introduce motifs that are more chromatic in nature.

"Of Science" features an unusual fugue beginning in the double-basses and cellos, which consists of all twelve notes of the chromatic scale. It is one of the very few sections in the orchestral literature where the basses must play a contra-b (lowest b on a piano).

"The Convalescent" acts as a reprise of the original motif, and ends with the entire orchestra climaxing on a massive chord.

"The Dance Song" features a very prominent violin solo throughout the section.

The end of the "Song of the Night Wanderer" leaves the piece half resolved, with high flutes, piccolos and violins playing a B major chord, while the lower strings pluck a C.

One of the major compositional themes of the piece is the contrast between the keys of B major, representing humanity, and C major, representing the universe. Because B and C are adjacent notes, these keys are tonally dissimilar: B major uses five sharps, while C major has none