By: George F. Handel Arr:Keith Terrett
For: Brass quartet
This music is in your basket
View basket
Loading... 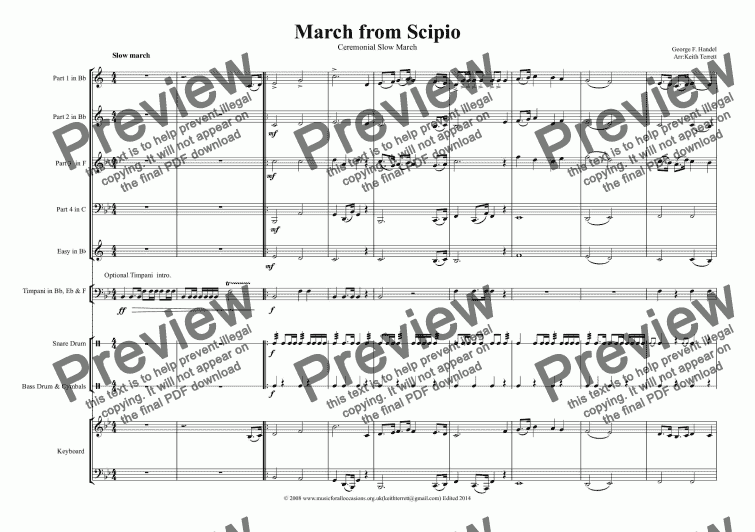 Composer
George F. Handel Arr:Keith Terrett
Arranger
Keith Terrett
Publisher
Music for all Occasions
Difficulty
Easy (Grades 1-3)
Duration
1 minute
Genre
Classical music
License details
For anything not permitted by the above licence then you should contact the publisher first to obtain permission.

Scipione (HWV 20) is an opera in three acts, with music composed by George Frideric Handel for the Royal Academy of Music (1719) in 1726. The librettist was Paolo Antonio Rolli. Handel composed Scipione whilst in the middle of writing Alessandro. It was based upon the life of Roman General Scipio Africanus. Its slow march is the regimental march of the Grenadier Guards.

The opera had its premiere on 12 March 1726 at The King's Theatre, Haymarket. Handel revived the opera in 1730, but it did not receive another UK production until October 1967, by the Handel Opera Society. In Germany, Scipione was revived at the Göttingen International Handel Festival in 1937, at the annual Handel Festival in Halle in 1965,[1] and by Christophe Rousset at the Festival de Beaune in 1993.

Ellen Harris has discussed Handel's specific use of musical keys in the opera, noting, for example, that the opera starts and concludes in G major. Winton Dean has noted that the opera originally contained the character of Rosalba, mother to Berenice. However, because the singer originally scheduled for the role of Rosalba was not available, that role was removed and the music and text transferred to other characters. In addition, Dean has commented on dramatic weaknesses in the plot of act 3.