Composer
Pierre EVEN
Full score details...
This music is in your basket View basket 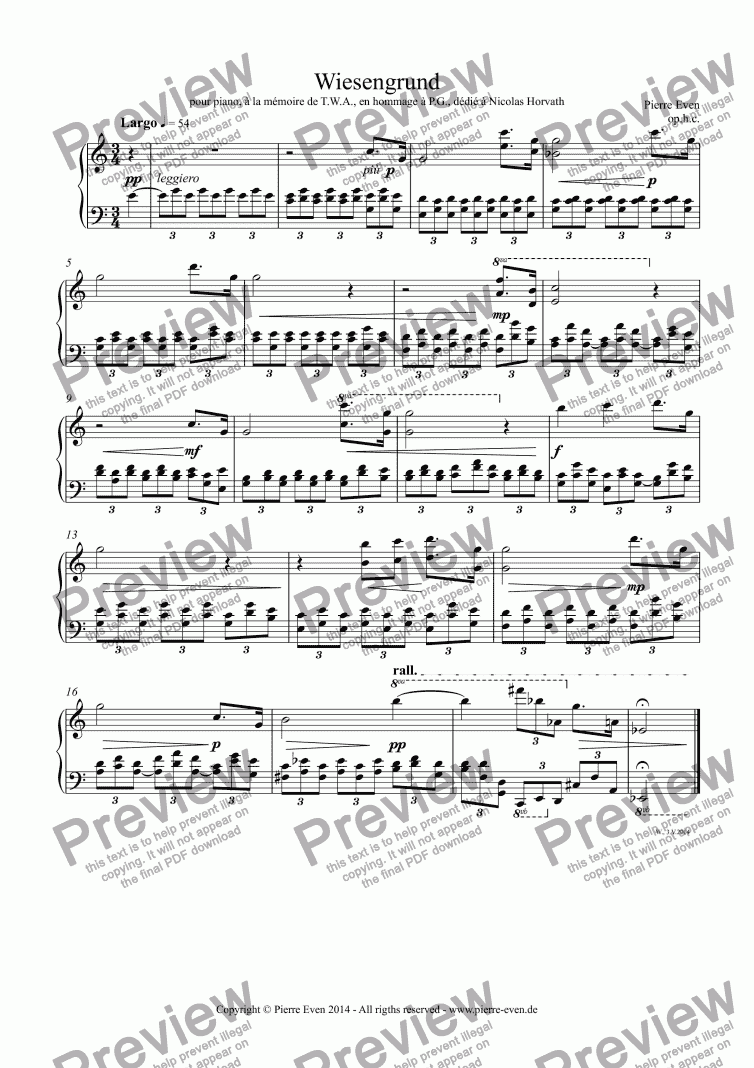 The philosopher and musicologist Theodor W. Adorno was my professor of aesthetics of music in 1967 at the University of Frankfurt, and it was Thomas Mann, who used Adorno’s paternal name Wiesengrund in his novel "Doktor Faustus", to explain the small motif at the beginning of the second movement of Beethoven’s sonata op. 111. Wiesengrund means meadowground. Using this little pattern, allowing it to develop itself on the middle voices of the accompaniment of Parsifal’s “Wie dünkt mich doch die Aue heut so schön!” (How beautiful the meadows seem today!), I wanted to remember some predecessors of minimal music in the 19th century, allowing them to develop themselves together. After nearly one minute of highest harmony, it ends abruptly by a dodecaphonic sequence, coming from the extreme ranges and ending in the five tones g-l-a-s-s (g-la-a-es-es), so I pay tribute at the same time to my former professor, to the history of minimal music and to Philip Glass. Grateful thanks to the pianist Nicolas Horvath, who inspired me to this composition: http://glasshomages.blogspot.fr/2014/05/pierre-even-wiesengrund.html

In order to submit this score to ScoreExchange.com Pierre EVEN has declared that they own the copyright to this work in its entirety or that they have been granted permission from the copyright holder to use their work. If you believe that this score should be not available here because it infringes your or someone elses copyright, please report this score using the copyright abuse form.