By: Joel Jacklich (A.S.C.A.P.)
For: String orchestra
This music is in your basket
View basket
Loading... 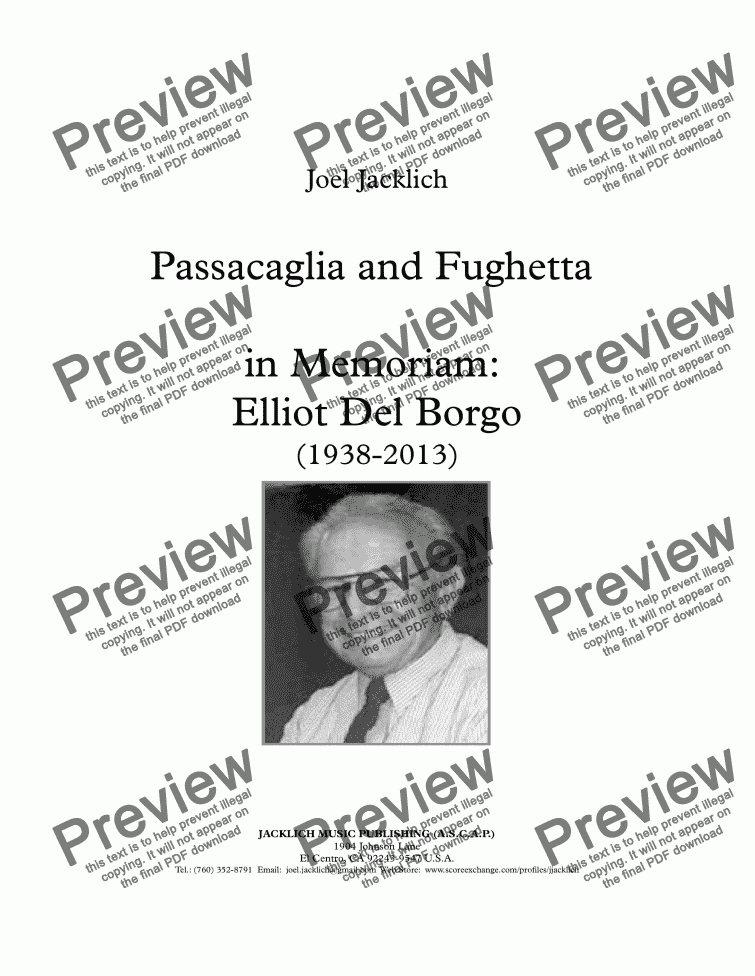 Composer
Joel Jacklich (A.S.C.A.P.)
Year of composition
2014
Publisher
Jacklich Music Publishing
Difficulty
Moderate (Grades 4-6)
Duration
7 minutes
Genre
Classical music
License details
For anything not permitted by the above licence then you should contact the publisher first to obtain permission.

Mitch Sturman, director of the Wilson Jr. H. S. “Warrior” Band in El Centro, CA, asked me to compose a piece to commemorate our mutual friend, composer Elliot Del Borgo, who passed away only a week after he had conducted one of his commissioned works at 2013's "Concert of Premieres" at Wilson. The result was the Passacaglia and Fughetta in Memoriam Elliot Del Borgo (1938-2013).

The two sections were originally conceived as two separate ideas, hoping one would come to fruition. Both sections began to take root, so eventually the two pieces were combined into a single piece.

At Mr. Sturman's suggestion, the passacaglia begins with the three initials of Mr. Del Borgo’s name: E(flat), D, B(flat) and continues in a downward motion in ¾ time (typical of passacaglias) and represents sadness at his passing.

The Fughetta theme (in its original form before being transposed to combine with the passacaglia) was Mr. Del Borgo's name spelled out musically:

When the two ideas were combined. The fughetta theme was transposed from its original in A minor/C Major key scheme to E minor/G Major in order to parallel the G minor of the opening passacaglia. Where the passacaglia represented sadness at Mr. Del Borgo's passing, the fugato section represents the arrival of a feeling of peace.

Reviews of Passacaglia and Fughetta in Memoriam: Elliot Del Borgo (1938-2013)