By: D Henshall
For: Duet
This music is in your basket
View basket
Loading... 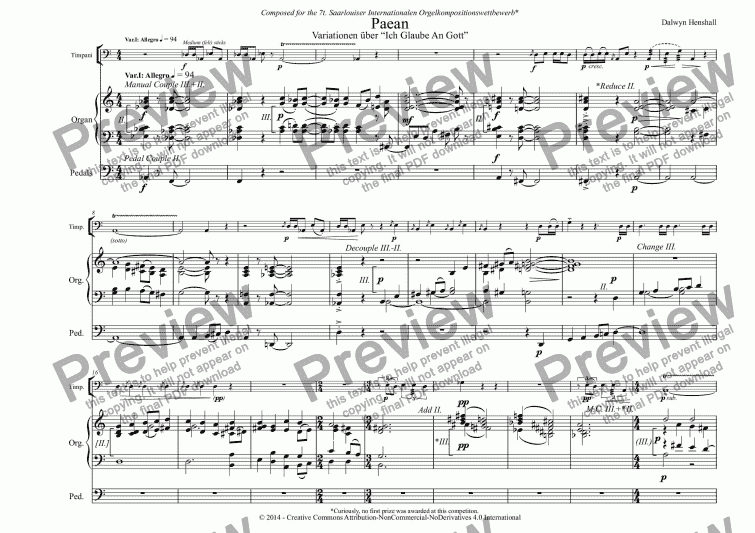 By: D Henshall
For: Duet

Composer
D Henshall
Year of composition
2014
Difficulty
Difficult (Grades 7+)
Duration
10 minutes
Genre
Modern classical music
License details
For anything not permitted by the above licence then you should contact the publisher first to obtain permission.

This piece was composed especially for the International Contest for Organ Compositions as part of the Saarlouis Organ Festival 2014 Festival and is based on the hymn-tune Ich Glaube An Gott. The first prize in the competition was witheld! a As the original material is so well known it was felt that there was no need to present the tune at the beginning. Instead, fragments appear through the course of the set of ten variations, each variation building on the preceding one, leading to a jubilant coda.

Precise details of stop choice and registration are left up to the performer save for three or four places where Cromorne, Nazard and Subbaß are specified. Elsewhere an asterisk (*) denotes that a stop colour-change may be effected at the wish of the performer.

Three types of staccato mark are used: (i) . The conventional mark equivalent to ½ the note value. (ii) > A mark suggesting ¾ the not value. (iii) _ Denotes a very slight break between notes.

General indication are given with the following indications and abbreviations:

The performer is required to use a selection of sticks including soft, medium and hard (felt) sticks and a pair of (hard) leather-bound sticks. In addition, at one point, the performer is to use an ordinary (strapless) cymbal to be placed on the centre of the smallest drum. It is assumed that each of the five timpani used are fully chromatic and pedal-tuned.

This score is made available under the terms of the Creative Commons Attribution-NonCommercial-NoDerivatives 4.0 International License. Whilst there is no restriction on copying and duplication of paper or electronic copies, notwithstanding the extreme unlikelhood of a performance or broadcast being made, such performance/broadcast must be logged with the PRS or equivalent body. This piece is registered with the PRS.