All Things Bright and Beautiful for Clarinet Choir & SATB

By: W. H. Monk (1823-89 Arranged by Keith Terrett
For: Clarinet choir
This music is in your basket
View basket
Loading... 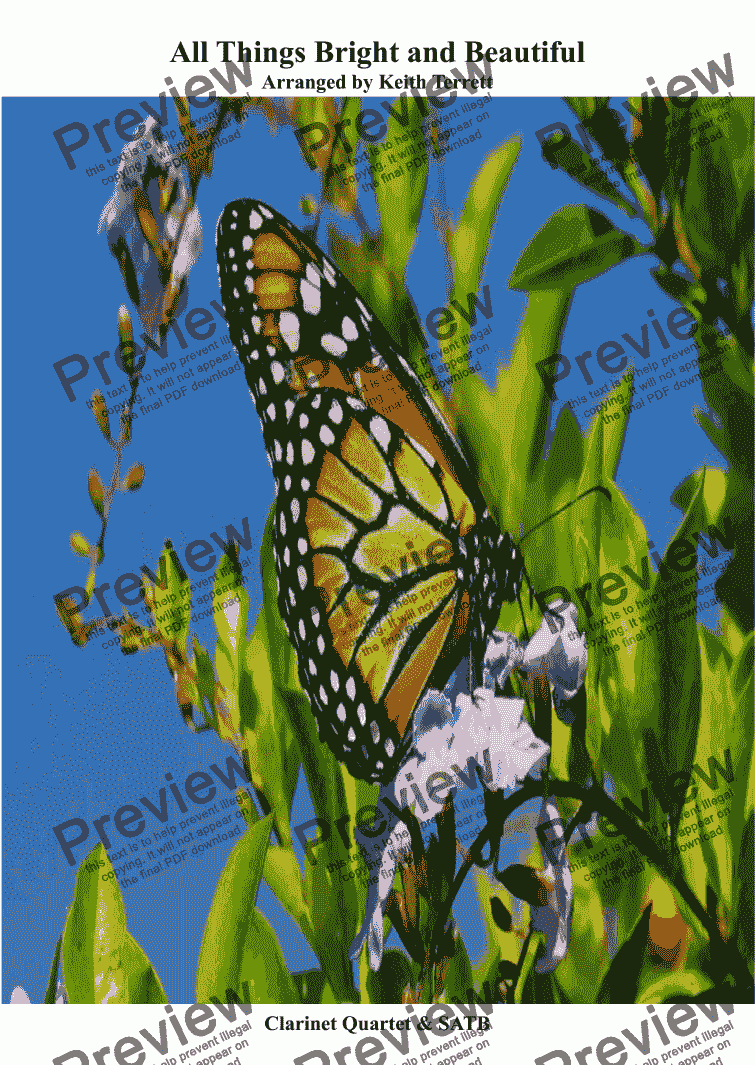 All Things Bright and Beautiful for Clarinet Choir & SATB

Composer
W. H. Monk (1823-89 Arranged by Keith Terrett
Year of composition
1700
Arranger
Keith Terrett
Year of arrangement
2014
Publisher
Music for all Occasions
Difficulty
Easy (Grades 1-3)
Duration
1 minute
Genre
Classical music
License details
For anything not permitted by the above licence then you should contact the publisher first to obtain permission.

An arrangement for Clarinet Quartet & SATB of All Things Bright & Beautiful.

All Things Bright and Beautiful is an Anglican hymn, also popular with other Christian denominations. The words are by Cecil Frances Alexander and were first published in her Hymns for Little Children.

The piece can be sung to several melodies, in particular the 17th-century English melody "Royal Oak", adapted by Martin Shaw, and "All Things Bright and Beautiful" by William Henry Monk. There have also been other adaptations, such as a full choral piece by John Rutter.

The hymn was first published in 1848 in Mrs. Cecil Alexander's Hymns for Little Children. It consists of a series of stanzas that elaborate upon verses of the Apostles' Creed. The hymn may have been inspired by a verse from Samuel Taylor Coleridge's The Rime of the Ancient Mariner: "He prayeth best, who loveth best; All things great and small; For the dear God who loveth us; He made and loveth all." Alternatively, inspiration may have come from William Paley's Natural Theology, published in 1802, that argues for God as the designer of the natural world. For example, the hymn's second verse alludes to "wings" and verse 7 refers to "eyes". Paley cited wings and eyes as examples of complexity of design, analogous to that of a watch, with God as the Divine Watchmaker.

Alexander's composition of the hymn's text has been attributed to three locations: Llanwenarth House in Govilon, Monmouthshire - the refrain "The purple headed mountains, The river running by" possibly referring to the Sugar Loaf and Blorenge mountains and to the River Usk; Markree Castle near Sligo, and Minehead and the nearby village of Dunster in 1848, in which case the "purple headed mountain" might refers to Grabbist Hill and the river to the River Avill.

Reviews of All Things Bright and Beautiful for Clarinet Choir & SATB