By: Giacomo Puccini Arranged by Keith Terrett
For: Solo Classical Guitar [notation] + piano
This music is in your basket
View basket
Loading... 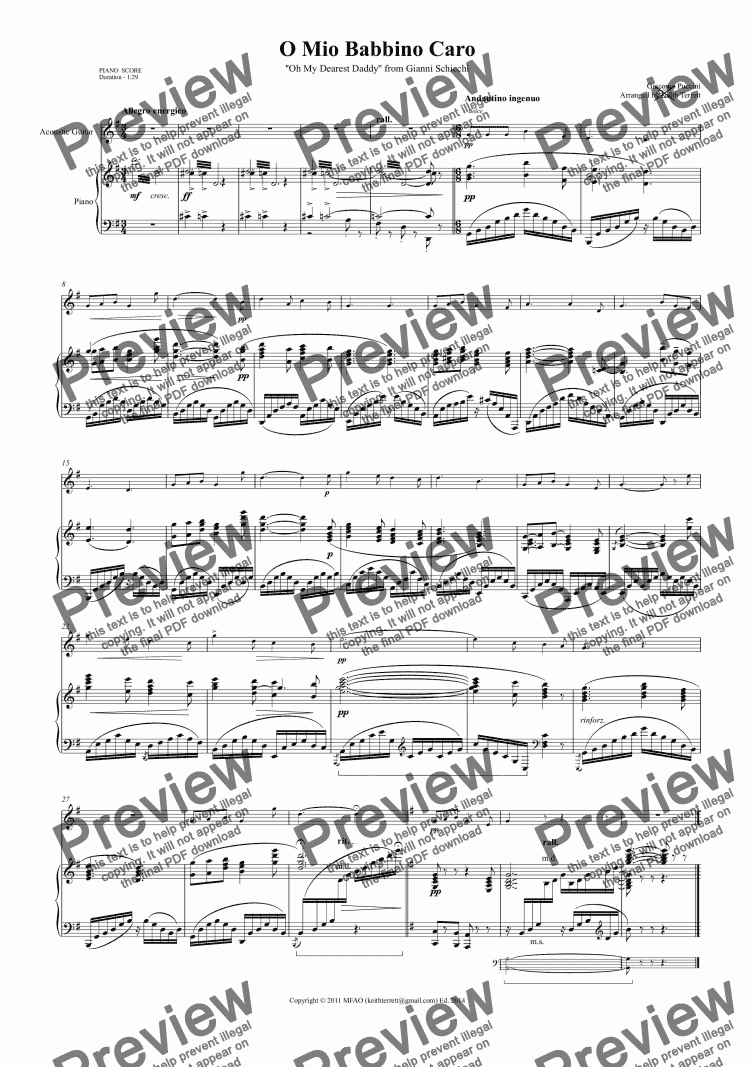 Composer
Giacomo Puccini Arranged by Keith Terrett
Arranger
Keith Terrett
Publisher
Music for all Occasions
Difficulty
Moderate (Grades 4-6)
Duration
2 minutes
Genre
Classical music
License details
For anything not permitted by the above licence then you should contact the publisher first to obtain permission.

"O mio babbino caro" ("Oh My Beloved Father") is a soprano aria from the opera Gianni Schicchi (1918) by Giacomo Puccini to a libretto by Giovacchino Forzano. It is sung by Lauretta after tensions between her father Schicchi and the family of Rinuccio, the boy she loves, have reached a breaking point that threatens to separate her from Rinuccio. It provides an interlude expressing lyrical simplicity and single-hearted love in contrast with the atmosphere of hypocrisy, jealousy, double-dealing, and feuding in the medieval Florence of Puccini's only comedy. It provides the only set-piece in the through-composed opera. Florence Easton as Lauretta at the world premiere of Gianni Schicchi, 14 December 1918

The aria was first performed at the premiere of Gianni Schicchi on 14 December 1918 at the Metropolitan Opera in New York by the popular Edwardian English soprano Florence Easton. It has been sung subsequently by many sopranos. Dame Joan Hammond won a Gold Record in 1969 for 1 million sold copies of this aria.

The aria is frequently performed in concerts and as an encore in recitals by many popular and crossover singers. It is used in several films, and some bands cover the aria in their own style.

The short aria consists of 32 bars and takes between 2½ and 3 minutes to perform. It is written in A-flat major with the time signature of 6/8 and a tempo indication of andantino ingenuo (eighth note=120). The vocal range extends from E♭4 to A♭5, with a tessitura of F4 to A♭5. The 5-bar orchestral prelude, in E-flat major and 3/4 time, consists of octave tremolos by the strings; in the opera, these five bars are Gianni Schicchi's words ("Niente!") at the end of his preceding dialogue with Rinuccio. Many recital arrangements start with a presentation of the melodic theme; the remaining accompaniment uses strings and a harp playing broken chords.