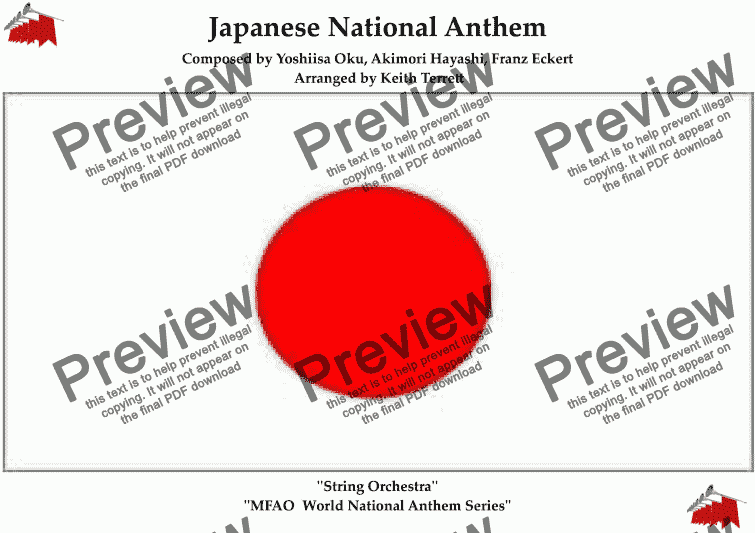 "Kimigayo" arranged for String Orchestra (君が代?) is the national anthem of Japan and the world's oldest lyrics in a national anthem. From 1868 to 1945, it served as the national anthem of the Empire of Japan. With a length of 11 measures and 32 characters, "Kimigayo" is also one of the world's shortest national anthems currently in use. Its lyrics are based on a waka poem written in the Heian period (794–1185), sung to a melody written in the imperial period (1868–1945). The current melody was chosen in 1880, replacing an unpopular melody composed eleven years earlier. While the title "Kimigayo" is usually translated as His Majesty's Reign, no official translation of the title nor lyrics has ever been established by law.

Prior to 1945, "Kimigayo" served as the national anthem of the Empire of Japan, however, when the Empire of Japan was dissolved following its surrender at the end of World War II, its parliamentary democracy successor state, the State of Japan, replaced it in 1945, the polity therefore changed from a system based on imperial sovereignty to one based on popular sovereignty. However, Emperor Hirohito was not dethroned, and "Kimigayo" was retained as the de facto national anthem, only becoming legally recognized as the official national anthem in 1999, with the passage of Act on National Flag and Anthem.

Since Japan's period of parliamentary democracy began, there has been controversy over the performance of the "Kimigayo" anthem at public ceremonies. Along with the Japanese Hinomaru flag, "Kimigayo" has been claimed by those critical of it to be a symbol of Japanese nationalism, imperialism and militarism, with debate over whether "Kimigayo", as a remnant of the Empire of Japan's imperialist past, is compatible with a contemporary Japanese parliamentary democracy. Thus, the essential points of the controversies regarding the Hinomaru flag and "Kimigayo" are whether they express praise or condemnation to the Empire of Japan and whether the Empire of Japan (pre-1945) and postwar Japan (post-1945) are the same states or different states.