By: arr. Philip R Buttall
For: Concert band / wind band
This music is in your basket
View basket
Loading... 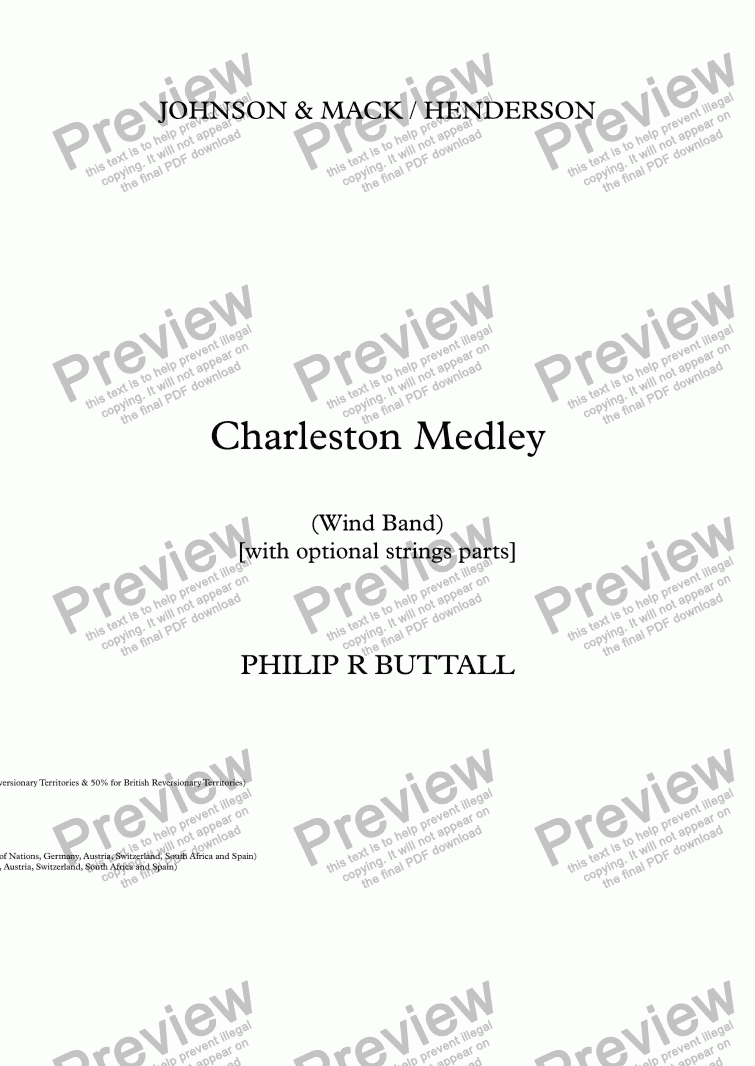 Composer
arr. Philip R Buttall
Arranger
Philip R Buttall
Year of arrangement
2017
Publisher
PRB Music
Difficulty
Difficult (Grades 7+)
Duration
3 minutes
Genre
Other
License details
For anything not permitted by the above licence then you should contact the publisher first to obtain permission.

The original idea for this medley of The Charleston and Black Bottom resulted from a ’Twenties Evening’ organised in aid of Multiple Sclerosis by a retired local piano teacher and good friend, whose husband unfortunately suffered from the illness for many years, before passing away a few months back.

Following the relative success of some of the smaller instrumental version, and an arrangement for Wind Band, the present version for Wind Band seemed a logical way forward, and has already received enquiries from potential customers as to when it would appear.

As before, I have included alternative Treble Clef versions of Trombones 1 & 2, and Euphonium. There is also an optional Keyboard part, intended to replace the Banjo sound in performance. This is not meant as a Banjo part as such, but more a simulation. Were an acoustic Banjo to be used in performance, the part would need to be transcribed by the player, and arranged according to the variety of Banjo used, and whether tab or musical notation is the preferred method for the individual player.

I have used NotePerformer to produce the attached MP3 file, and the 'banjo' part can be heard - but not seen!

Recently I was contacted by Greg Maldonado, a High School Orchestra Director in Las Vegas, Nevada, USA. Greg wrote: 'I saw your Charleston Medley Band arrangement on Score Exchange and I'm wondering there's any chance that you have, or can add, string parts for a full Orchestra arrangement (Violin 1 & 2, Viola, Cello, Contrabass) in addition to your lovely band arrangement? I teach one period where I have a full Orchestra and am looking for selections that my group can play at our upcoming Prom Assembly, where the theme is "The Great Gatsby."

Always willing to oblige, I have now added parts for Violins 1 and 2, Viola and Cello (a String Double Bass was already present) a,d incorporated them into the new full score. It must be emphasized that they are not intended to stand on their own, as some kind of String Orchestra version of my arrangement, but rather are complementary to the original Wind Band Version.

If you didn't want the optional string parts, then just don't add them to your basked if purchasing. Equally, if you don't need them, and prefer to have a Full Score without these optional parts showing, then one is available as a 'part' from the Set of Parts.