Largo (from Concerto in D Major for Lute, RV. 96) for Brass Quintet (Pro-version)

By: Antonio Vivaldi(1648-1741) Arranged Keith Terrett
For: Brass quintet
This music is in your basket
View basket
Loading... 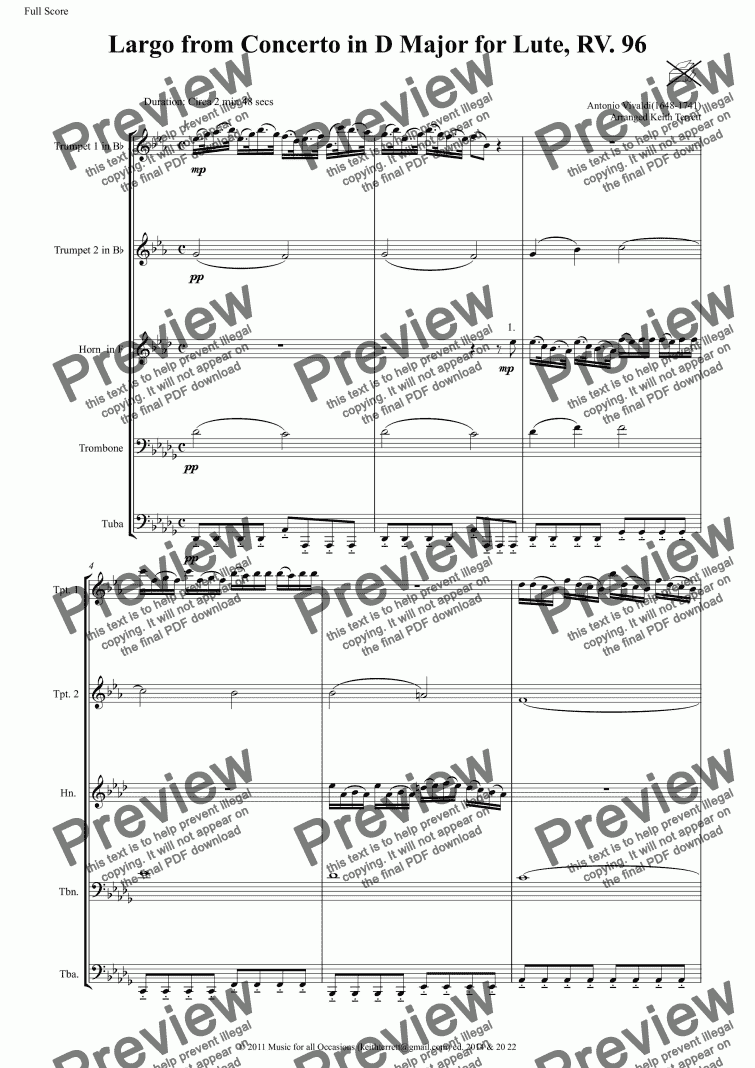 Largo (from Concerto in D Major for Lute, RV. 96) for Brass Quintet (Pro-version)

Composer
Antonio Vivaldi(1648-1741) Arranged Keith Terrett
Arranger
Keith Terrett
Publisher
Music for all Occasions
Difficulty
Difficult (Grades 7+)
Duration
4 minutes
Genre
Classical music
License details
For anything not permitted by the above licence then you should contact the publisher first to obtain permission.

An arrangement for Pro Brass Quintet of the famous Vivaldi Largo.

Antonio Lucio Vivaldi (4 March 1678-28 July 1741), nicknamed il Prete Rosso ("The Red Priest") because of his red hair, was an Italian Baroque composer, priest, and virtuoso violinist, born in Venice. Vivaldi is recognized as one of the greatest Baroque composers, and his influence during his lifetime was widespread over Europe. Vivaldi is known mainly for composing instrumental concertos, especially for the violin, as well as sacred choral works and over 40 operas. His best known work is a series of violin concertos known as The Four Seasons.

Many of his compositions were written for the female music ensemble of the Ospedale della Pietà, a home for abandoned children where Vivaldi worked between 1703 and 1740. Vivaldi also had some success with stagings of his operas in Venice, Mantua and Vienna. After meeting the Emperor Charles VI, Vivaldi moved to Vienna hoping for preferment. The Emperor died soon after Vivaldi’s arrival, and the composer died a pauper, without a steady source of income.

Though Vivaldi’s music was well received during his lifetime, it later declined in popularity until its vigorous revival in the first half of the 20th century. Today, Vivaldi ranks among the most popular and widely recorded Baroque composers.

Reviews of Largo (from Concerto in D Major for Lute, RV. 96) for Brass Quintet (Pro-version)