By: Malcolm Dedman
For: Brass quintet
This music is in your basket
View basket
Loading... 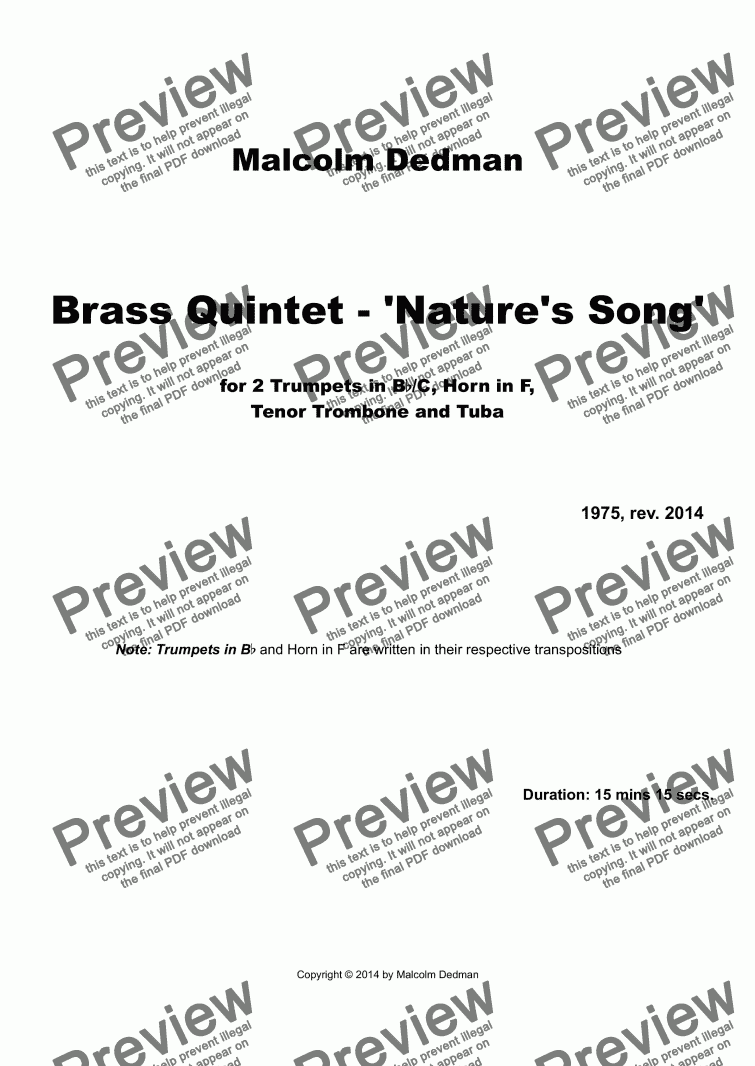 By: Malcolm Dedman
For: Brass quintet

Composer
Malcolm Dedman
Publisher
Misty Mountain Music
Difficulty
Difficult (Grades 7+)
Duration
15 minutes
Genre
Modern classical music
License details
For anything not permitted by the above licence then you should contact the publisher first to obtain permission.

This Brass Quintet is for a standard ensemble of two trumpets, horn, tenor trombone and tuba and lasts just over 15 minutes. Originally written in 1975, the composer decided to revise it extensively in 2014 in order to make it more practical to perform and to address many compositional inadequacies in the original.

Its subtitle, ‘Nature’s Song’ is reflected by the titles of the three movements: ‘Universal Nature’, ‘Earthly Nature’ and ‘Nature of Mankind’. The whole work is based on the harmonic series on B flat, which brass instruments use naturally, except that the piece makes use of the ‘out of tune’ notes of this series in the form of a mode. In the first movement the players are asked to use the natural harmonic tuning as this is used to describe the harmonic proportions that exist in nature, hence the title ‘Universal Nature’. The movement ends with a flourish of notes from the B flat harmonic series, rising and falling.

The second movement focuses on the Earth itself and describes the cruelty that exists, both in Nature itself and on what mankind is doing to the planet. Although still based on the B flat harmonic series, the notes are normal tempered tuning, and the remaining notes of the 12-tone octave are introduced. The movement builds to a brutal climax, after which the music expresses deep regret as to what has happened. The movement ends joyfully, as it began, indicating a resolution to the crisis.

The third movement focuses on mankind’s spiritual nature. It begins with a pseudo plainchant on the trombone; also imitations of early brass consort music can be heard. The movement brings the work to a close with a joyful allegro, with much voice imitation in addition to a reprieve of the ‘harmonic’ chords that appeared in the first movement.