By: Johnson Lee
For: Concert band / wind band
This music is in your basket
View basket
Loading... 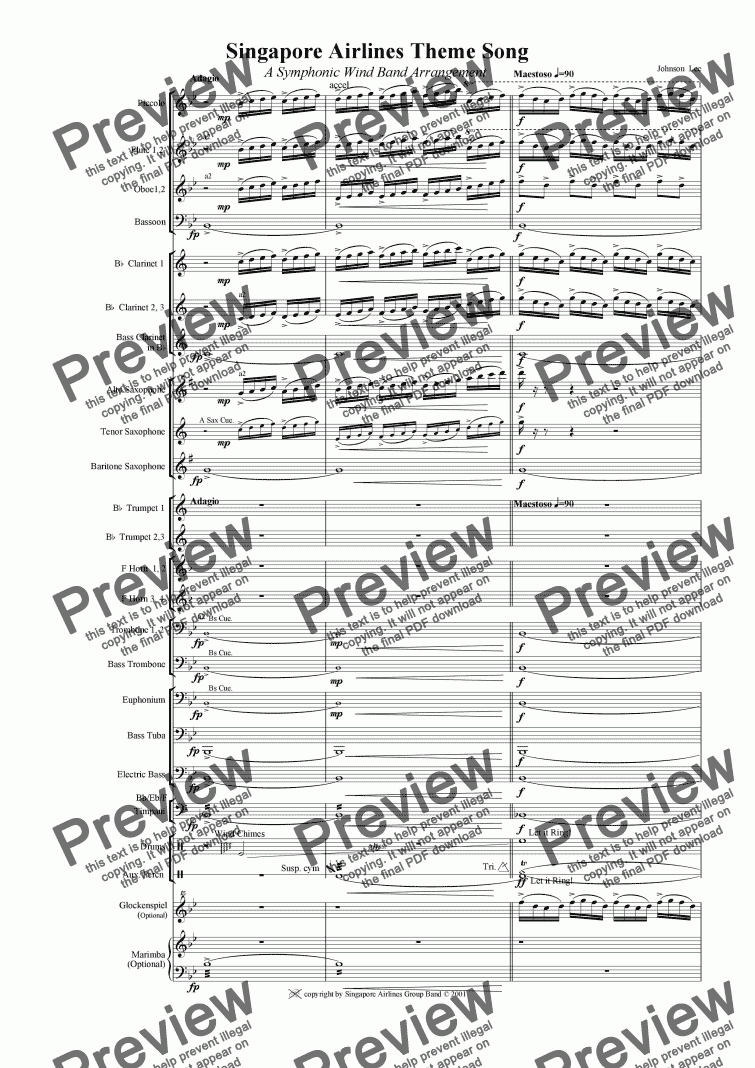 Composer
Johnson Lee
Lyricist
none
Difficulty
Moderate (Grades 4-6)
Duration
3 minutes
Genre
Other
License details
For anything not permitted by the above licence then you should contact the publisher first to obtain permission.

This newly commissioned arrangement was initiated by Mr Vincent Koh, Chairman of the Singapore Airlines Group Band in 2001.

The introduction of this piece paints an imagery of an airplane taking-off the runway. The lower brass and timpani starts of in the tonic note mimicking the low hum of the jet engine. This is followed by the woodwinds ascending the scales and gradually picking up speed and finally reaching a steady tempo.

The first section is arranged in a simple four-beat tempo depicting the beginnings of Singapore Airlines; a simple yet elegant airline providing the basic services to her passengers.

In the 80s, the airline decided to position itself as a youthful and friendly airline using the ?Singapore Girl? dressed in ?Sarong Kabaya? as their icon; the familiar tropical rhythm of the ?Rhumba? tempo is used to treat the theme in the second section.

As the airline grew over the years, it has matured and built a reputation as a reliable and safe airline. She has won several awards and received many accolades. Not resting on her laurels, the airline broke paradigms and introduced individualized games and video consoles to her passengers. In the 21st Century, she has once again outdone herself by introducing LAN games for long haul flights.

The finale section is arranged in the ?asymmetrical rhythmic meter? of 10 quaver beats in a bar used by Post-modernist composers. In the style of Allegro con fouco (lively with fire), it is energetic, sophisticated; yet challenging.

Sorry, there's no reviews of this score yet. Please .
In order to submit this score to ScoreExchange.com Johnson Lee has declared that they own the copyright to this work in its entirety or that they have been granted permission from the copyright holder to use their work. If you believe that this score should be not available here because it infringes your or someone elses copyright, please report this score using the copyright abuse form.