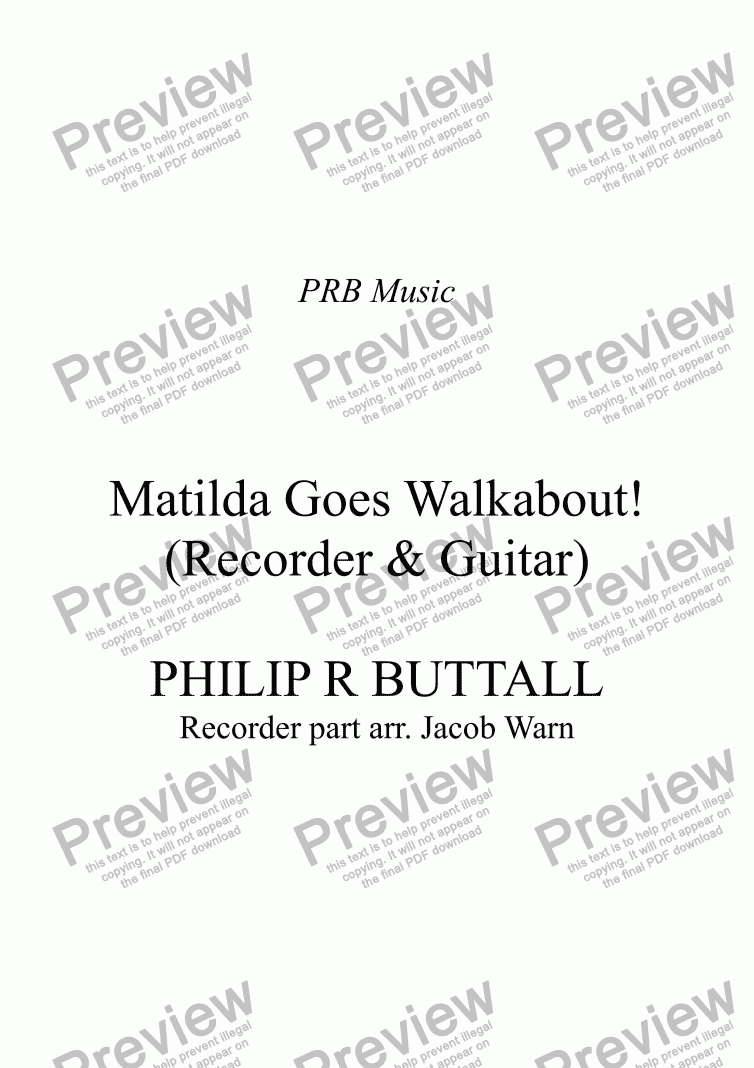 Composer
Philip R Buttall
Year of composition
2014
Publisher
PRB Music
Difficulty
Difficult (Grades 7+)
Duration
4 minutes
Genre
World music
License details
For anything not permitted by the above licence then you should contact the publisher first to obtain permission.

Some while ago I was contacted by fellow music-teacher, Maxine Ward, who’d heard Australian Duo, Craig Ogden (guitar) and Judith Hall (flute) play my specially-arranged version of Matilda Goes Walkabout! at a concert in her home-base of Bristol.

Maxine wrote: ’I picked up your contact details through Craig Ogden. I recently went to see him perform with Judith Hall at St Georges, Bristol and was really taken by your fantastic arrangement of Waltzing Matilda. Is there any chance of obtaining/purchasing a copy of this arrangement? My son and husband perform occasionally as a guitar and recorder duo - Windy Strings - and obviously a lot of repertoire is taken from guitar and flute. This would be a fantastic piece for them (my husband also plays a little didgeridoo!). We would really appreciate your help!

I was pleased to help them, of course, but realising that Maxine’s son, Jacob - now studying Classics at Oxford - was a very accomplished recorder player in his own right, I thought it best if he were to arrange the original Flute part for his own instrument.

I’m delighted to say that Jacob was more than happy to do this, and used both the Descant and Tenor recorders in his reworking. At the end of the score he has provided a very helpful note about what he has done, with some very useful specific technical points as well.

Originally, in the version for Craig and Judith, I also provided a curtailed version which they often used as an encore, and so I have done the same here, with the new Recorder version.

Music is always a small world, and it transpired that Jacob’s Recorder teacher is also a highly-sought-after oboist, and who usually plays 1st Oboe in an orchestra in Plymouth which I have frequently reviewed! Also, Jacob was part of the National Youth Recorder Orchestra who recorded another of my pieces on one of their CDs some time beforehand.

Jacob commented: ’When I get back in December, I’ll be able to start putting the piece together with my Dad! I know he’s keen to try and use his didgeridoo at some point… we’ll see how that goes and I’ll let you know!’

I certainly look forward to that, Jacob! And many thanks for all your help, too!