By: Various composers
For: Brass quartet
This music is in your basket
View basket
Loading... 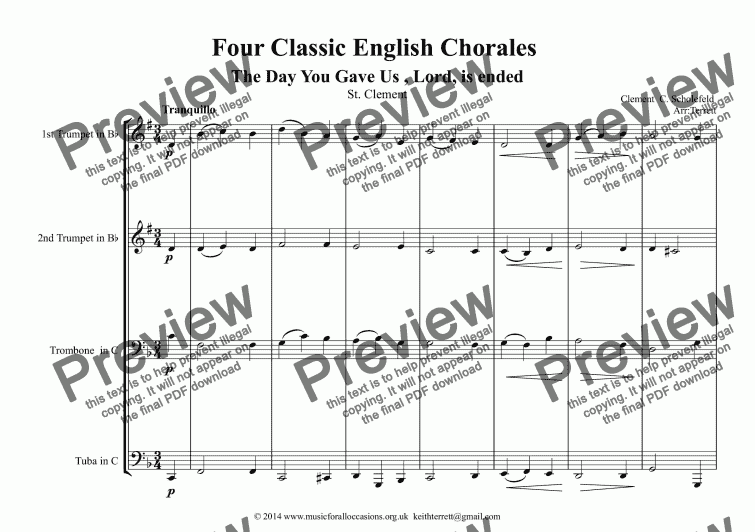 By: Various composers
For: Brass quartet

Composer
Various composers
Arranger
Keith Terrett
Publisher
Music for all Occasions
Difficulty
Moderate (Grades 4-6)
Duration
3 minutes
Genre
Classical music
License details
For anything not permitted by the above licence then you should contact the publisher first to obtain permission.

A collection of four English hymns/chorales arranged for Brass Quartet.

Alternative parts, such as a French Horn to replace Trumpet 2 are available on request.

The Day You Gave Us , Lord, is ended St. Clement:

St Clement, in 98. 98. meter, is a popular tune to John Ellerton’s hymn The Day Thou Gavest, Lord, is Ended. The tune is generally credited to the Rev. Clement Cotteril Scholefield (1839–1904).[1] It first appeared in Sir Arthur Sullivan’s Church Hymns with Tunes (1874). The Rev. Scholefield was born at Edgbaston, Birmingham[1] and was the youngest son of MP William Scholefield, MP for Birmingham.

However, in 2000 the Rev. Ian Bradley, reader in Church History and Practical Theology at St Andrews University and author of The Daily Telegraph Book of Hymns, wrote of a connection between Sullivan, who composed the music for Gilbert and Sullivan’s comic operas and many hymns, among other works both sacred and secular, and Rev. Scholefield. "The two men were good friends while Sullivan was organist at St Peter’s Church, South Kensington, from 1867 to 1872". In his book, Bradley writes:

In an article in the Hymn Society Bulletin in 1994 Mervyn Horder, himself a hymn-tune composer, suggested that ’Sullivan almost certainly had a larger hand in St Clement than has been or can ever definitely be, credited to him.’ His starting-point was the fact that this tune stands head and shoulders above the quality of Scholefield’s other work. None of the 41 other hymn-tunes penned by this self-taught musician show anything like the craftsmanship, originality or melodic sweep of St Clement.

Lyte wrote the poem in 1847 and set it to music while he lay dying from tuberculosis; he survived only a further three weeks after its completion.

The hymn is popular across many denominations, and was said to be a favourite of King George V and Mahatma Gandhi. It is also often sung at Christian funerals. In the aftermath of the sinking of RMS Titanic, survivors reported that the Titanic’s band played the hymn as the ship was sinking, although detailed studies have identified other songs played by the band.

The hymn is sung at the annual Anzac Day services in Australia and New Zealand, and in some Remembrance Day services in Canada[7] and the United Kingdom. It is also played by the combined bands of the Indian Armed Forces during the annual Beating Retreat ceremony held on 26 January at Vijay Chowk, New Delhi, which officially marks the end of Republic Day celebrations. A choral version of this hymn has been arranged by Moses Hogan.

Phrases of the finale of Gustav Mahler’s Symphony No. 9 are often noted for their similarity to Monk’s Eventide.

Thelonious Monk recorded an instrumental version of Abide with Me with his jazz septet as the first track of the 1957 album Monk’s Music. In 2006, two different takes of the recording were released on The Complete 1957 Riverside Recordings, an anthology of Thelonious Monk’s work with John Coltrane.

The hymn was also set to music around 1890 by the American composer Charles Ives, and was published in his collection Thirteen Songs in 1958, four years after his death.

The pipes and drums of the Royal Scots Dragoon Guards played the hymn in their 2007 album, Spirit Of The Glen.

Hayley Westenra recorded the hymn on her third international album, Treasure, and performed it live at various sporting events, including the Rugby League Challenge Cup Final in August 2009.

In 2013, Joe McElderry and the Royal Mail Choir recorded the song, and it was released as a charity single on 14 April 2013, raising money for Prostate Cancer UK. This version reached number 19 in the UK indie charts.

Since the 1927 FA Cup Final between Arsenal and Cardiff City, the first and last verses of the hymn are traditionally sung at the FA Cup Final before the kick-off of the match, at around 2.45pm BST.

It also featured on the B-side of the The Christians, Holly Johnson, Paul McCartney, Gerry Marsden and Stock Aitken Waterman charity single "Ferry Cross the Mersey" in 1989, which was recorded in memory of the Hillsborough disaster victims.

The hymn has been sung prior to the kick-off at every Rugby League Challenge Cup final since 1929, the first final to be held at Wembley Stadium.

"Abide with Me" was also sung at the 2012 Summer Olympics opening ceremony, performed by Scottish singer Emeli Sandé.

In film and television:

Film Shane (1953) TV series Twilight Zone (1962) – In episode The Last Rites of Jeff Myrtlebank Film Fist of Fury (1972) – Played by brass band in funeral scene TV series/Film Scenes from a Marriage (1973) – In episode Innocence and Panic TV series Ripping Yarns (1976–9) – In episode The Testing of Eric Olthwaite Film A Bridge Too Far (1977) – Sung by wounded British paratroopers at a field hospital TV Doctor Who: In episode Kinda (1982) In episode Gridlock (2007)