By: Irish Folksong Arranged by Keith Terrett
For: Concert band / wind band
This music is in your basket
View basket
Loading... 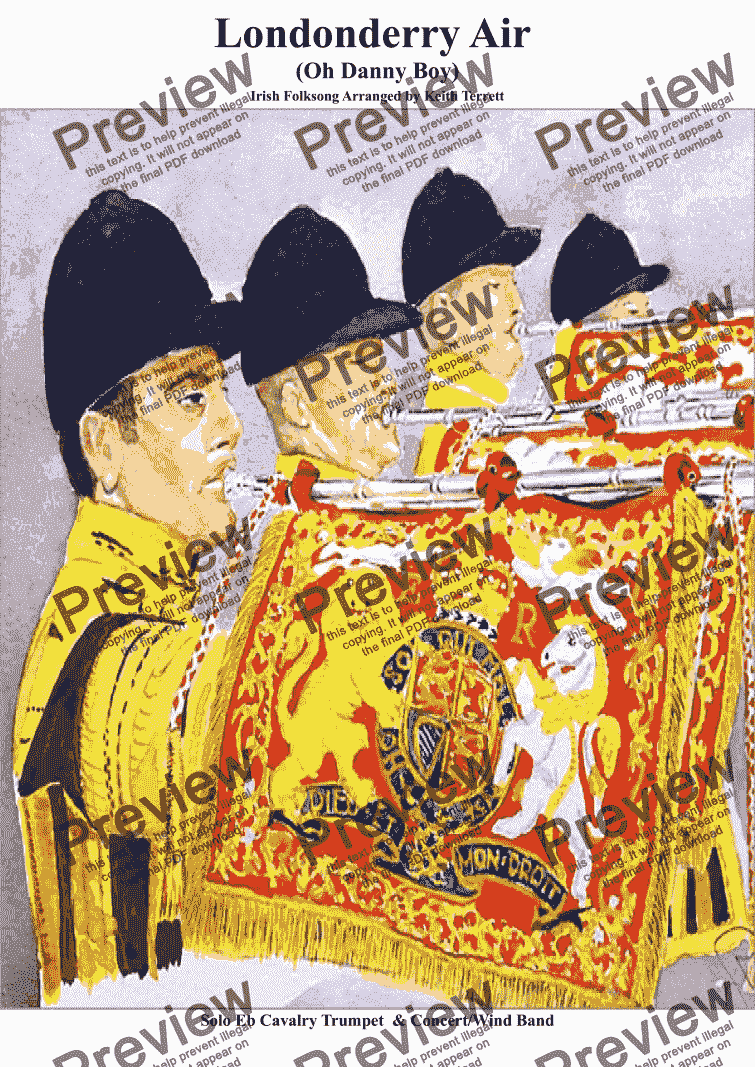 Composer
Irish Folksong Arranged by Keith Terrett
Arranger
Keith Terrett
Year of arrangement
2009
Publisher
Music for all Occasions
Difficulty
Moderate (Grades 4-6)
Duration
2 minutes
Genre
Classical music
License details
For anything not permitted by the above licence then you should contact the publisher first to obtain permission.

This version was inspired by my former Bandmaster of the ''Queen's Royal Irish Hussar Band'', the late & great Peter Bernard Smith MBE; who arrangement I first played in Paderborn West Germany when I was a member of this fine Military Band from 1974/85. His composition & arranging skills left a deep impression on me; and it was he who inspired me to try my hand at composing & arranging.

Danny Boy" is a ballad written by English songwriter Frederic Weatherly and usually set to the Irish tune of the "Londonderry Air". It is most closely associated with Irish communities.

Initially written to a tune other than "Londonderry Air", the words to "Danny Boy" were penned by English lawyer and lyricist Frederic Weatherly in Bath, Somerset in 1910. After his Irish-born sister-in-law Margaret (known as Jess) in the United States sent him a copy of "Londonderry Air" in 1913 (an alternative version has her singing the air to him in 1912 with different lyrics), Weatherly modified the lyrics of "Danny Boy" to fit the rhyme and meter of "Londonderry Air".

Weatherly gave the song to the vocalist Elsie Griffin, who made it one of the most popular songs in the new century; and, in 1915, Ernestine Schumann-Heink produced the first recording of "Danny Boy".

Jane Ross of Limavady is credited with collecting the melody of "Londonderry Air" in the mid-19th century from a musician she encountered.

There are various theories as to the true meaning of "Danny Boy". Some listeners have interpreted the song to be a message from a parent to a son going off to war or leaving as part of the Irish diaspora.

The 1918 version of the sheet music included alternative lyrics ("Eily Dear"), with the instructions that "when sung by a man, the words in italic should be used; the song then becomes "Eily Dear", so that "Danny Boy" is only to be sung by a lady". In spite of this, it is unclear whether this was Weatherly's intent.

Danny Boy" is considered to be an unofficial signature song and anthem, particularly by Irish Americans and Irish Canadians.

The song is popular for funerals; but, as it is not liturgical, its suitability as a funeral song is sometimes contested. In 1928, Weatherly himself suggested that the second verse would provide a fitting requiem for the actress Ellen Terry.

A big band version of the song is used as the theme for The Danny Thomas Show (a.k.a. Make Room For Daddy).

"Danny Boy" was used to represent Northern Ireland at the start of the London 2012 Olympics opening ceremony, sung by a choir of children on the Giant's Causeway.

On November 25, 2014, the Vancouver Canucks used the song in honor of the recently deceased Pat Quinn, who played and worked in many executive capacities for the team.