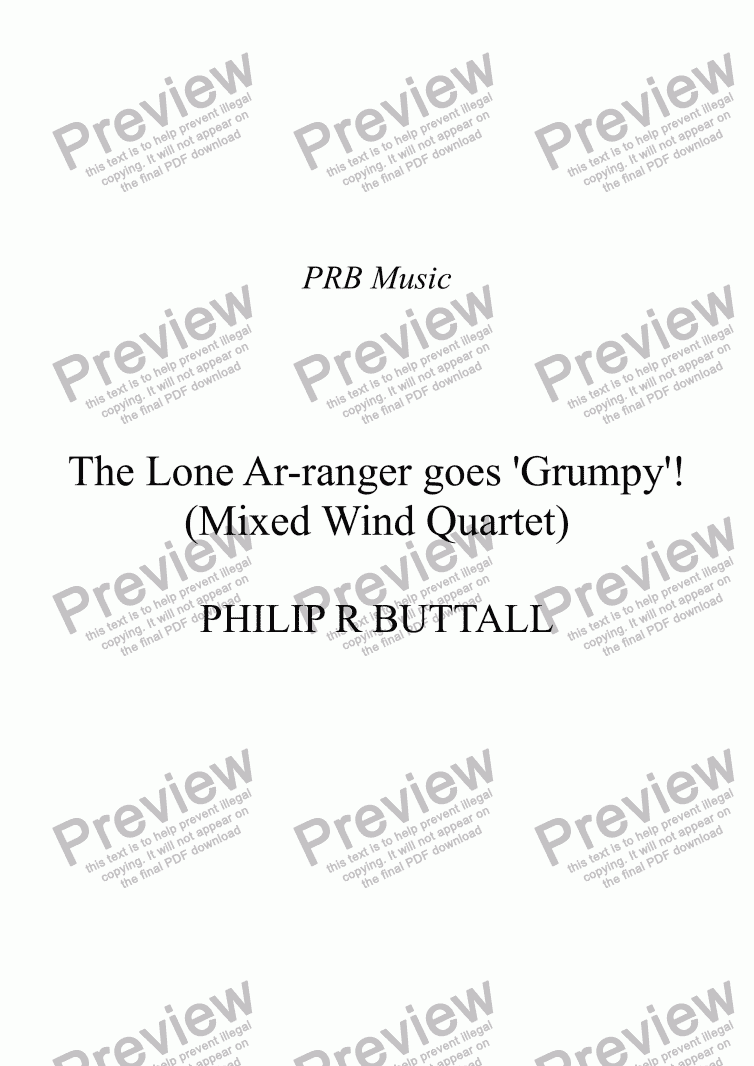 Composer
Philip R Buttall
Year of composition
2015
Publisher
PRB Music
Difficulty
Difficult (Grades 7+)
Duration
4 minutes
Genre
Classical music
License details
For anything not permitted by the above licence then you should contact the publisher first to obtain permission.

The term ’Grumpy’ is here used in a particular way. Bassoonist, Dejan Ucakar, asked for a ’special’ arrangement of The Lone Ar-ranger to be used in a concert at the Music School in Krsko, Slovenia, where he works. Dejan will be joined by three other members of staff in the performance, and the idea is that the three ’bass’ instruments are left to growl in their ’grumpy’ bass registers, while the clarinet makes his contribution over the top, in a particularly high register, with lots of opportunities to show off, as well as have some extra fun along the way, for example in the short cadenza near the start, where it seems that the clarinettist might get his way to play the opening of Beethoven’s Pastoral Symphony, before the three bass players ’remind’ him that they’re ready to starting Rossini’s William Tell Overture which, of course, then turns into The Lone Ar-ranger!

There is, of course, a conventional arrangement for this rather unusual combination, with everyone here in their best register, entitled The Lone Ar-ranger (Mixed Wind Quartet). This doesn’t have the jokes, or extra ’little tunes’ thrown in, though - but might just sound better!! This was, in fact, my original version for them, before I realised that it was intended to be a fun, comic performance, rather than a perfectly balanced quartet.