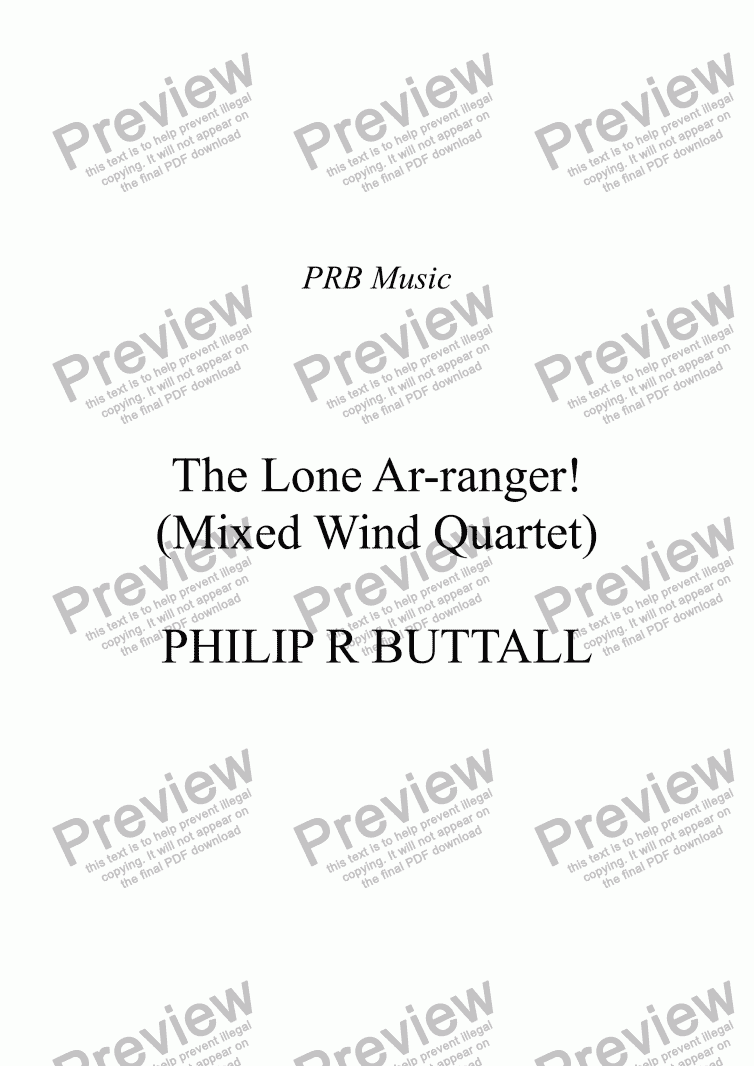 Composer
Philip R Buttall
Year of composition
2015
Publisher
PRB Music
Difficulty
Difficult (Grades 7+)
Duration
3 minutes
Genre
Classical music
License details
For anything not permitted by the above licence then you should contact the publisher first to obtain permission.

A short while ago I was contacted by bassoon teacher, Dejan Ucakar who works in a music school in Krsko, Slovenia. He asked whether I could make an arrangement of The Lone Ar-ranger for a specific combination, and one which you don’t encounter that often - Clarinet, Bariton Saxophone, Bass Clarinet and Bassoon.

It seemed a slightly unusual one, consisting of three ’bass’ instruments, and one higher-register woodwind. So I set about doing it, and aimed to use the instruments in their best registers to get the nicest sound.

When I’d done this, while Dejan and his colleagues at the school were pleased with what I’d come up with, they explained further the real purpose of the task - to provide them with a special piece for a staff performance later in the year, where they really wanted to contrast the ’grumpy’ sounds of the three bass instruments with the much higher clarinet, and to give the clarinet all the high-lights and ’show-off’ passages to play!

So I re-wrote the arrangement and included a fair bit of extra comedy in the writing, which will hopefully look good when they perform it, even if the deliberately unbalanced sound might not.

But, rather than waste my efforts on the original version, I have included it here as a Mixed Wind Quartet version.

If you want to see and hear the later, comic version, just click the following title: The Lone Ar-ranger goes Grumpy!

The picture shows the Music School; in Krsko, Slovenia.

Reviews of The Lone Ar-ranger! (Mixed Wind Quartet No 1)