By: Sevag Derghougassian
For: Piano trio
This music is in your basket
View basket
Loading... 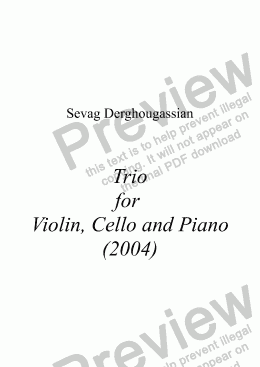 By: Sevag Derghougassian
For: Piano trio

Composer
Sevag Derghougassian
Year of composition
2004
Publisher
Composer
Difficulty
Difficult (Grades 7+)
Duration
15 minutes
Genre
Modern classical music
License details
For anything not permitted by the above licence then you should contact the publisher first to obtain permission.

SEVAG DERGHOUGASSIAN : ‘‘MUSIC IS ONE CHANNEL THROUGH WHICH WE EXCHANGE CULTURES’’ In his childhood, Sevag Derghougassian was very marked by the cartoon of Tom and Jerry where the mouse is a pianist giving a concert! This is even what led him to choose music as a profession! This young composer lives in Lebanon and his chamber music is very much related to Mozart and Haydn. It is precisely his trio for piano, violin and cello, ‘Sarcasm’ that will be played on November 28th at St. Hermelin in Loire Atlantique, as part of a concert dedicated to Lebanese composer by Claire Foison (piano) , Rudolph Gaut (violin) and Bahia El Bacha (cello).

Can you tell the readers of Agenda Culturel about the concert of November 28th? After the book ‘Compositeurs Libanais’ (see page 79 therein for my profile) was published, I was contacted via e-mail by the author Zeina Saleh Kayali. She asked me to send my compositions to Claire Foison, a pianist based at the Boulogne-Billancourt Conservatory. At an April 2015 dinner and concert at a restaurant in Nantes, France, Claire (piano), Rodolphe Gault, violin, and Bahia El Bacha, cello, performed my trio No. 1 ‘Sarcasm’ and duet ‘Nocturne’ amongst the work of two additional Lebanese classical music composers – Naji Hakim and Abdul Rahman El Bacha. The event was well attended and received good reviews. Following the April 2015 concert, the organizers became interested in hosting another concert featuring chamber music by contemporary Lebanese composers. This upcoming event will be at Médiathèque Hermeland, located in Saint-Herblain, Loire-Atlantique, France on November 28th, 2015 at 4:30 pm. At this Saturday afternoon concert, my trio No. 1 ‘Sarcasm’ will be performed amongst the compositions of Naji Hakim and Abdul Rahman El Basha.

Could you briefly comment this Trio n° 1, ‘Sarcasm’ ? Along with my piano Sonata No. 1 ‘Prelude Onstage’, Sonata No. 2 ‘Faust’ and several other compositions, this trio is an early composition in which I incorporated the classical forms of Haydn, Mozart and Beethoven with harmonies and rhythms containing both Oriental and Occidental elements. A little over a decade ago, I was playing trios by Mozart, Dvorák and Shostakovich with friends. Inspired by our practice sessions and performances, I composed the first 3 movements of my first trio along with the theme of the last movement, leaving the work incomplete that year. Then, influenced by the twelve - tone techniques of Schoenberg and Babadjanian, I left classical tonal music, later coming back to tonal methods with elements from the 2004 period: clusters, theme and its reverse played at the same time; freedom from time signature; slow and/or fast motions, etc. In 2013, I revised and completed the first trio and entitled it ‘Sarcasm’.

What about your own musical journey? To give your readers a sense of my generation as a classically trained pianist and mostly self- taught composer: I spent my teenage years in the 1990s living and studying in North Metn, Lebanon and my first public performance as a pianist was in 1999 in Beirut. As a young child, I listened at home to classical music by Mozart, Haendel, Khachaturian, Chopin, and Liszt in addition to Greek, Russian, Arabic, Turkish and Armenian ethnic folk music. At age 10, I started learning piano – initially taught by my mother and later by private teachers. These were times when Lebanon was torn apart with deadly civil war. Indeed, there were times when I had to stop my piano lessons because of instability. I played the piano at various events during my high school years at AGBU, an Armenian-Lebanese private school. And in 1997, I entered the Lebanese Conservatory; in 1998, I received my first diploma, and in 2001, my second diploma in Piano. Although I had composed around twenty other compositions as a student between the ages of 14 and 20, I consider my ‘Nocturne for Violin and Piano in B Minor’ (1999) to be my first composition. In 2001, I participated in the West Eastern Divan Workshop and Orchestra in Chicago where Daniel Barenboim (now at La Scala) reviewed the score and organized my performance of this duet at Northwestern University. This was my first success on an international level. During the 33 days of war in Lebanon in 2006, I composed my piano concerto ‘The War’, finalizing it in 2013 after several revisions. Over the past decade, I have composed over 25 classical pieces for solo piano, chamber groups, as well as piano and orchestra. Through music, my expressions flow directly from my mind to the mind of the listener. My compositions range widely to convey the controversies apparent in modern society and lifestyles. I am particularly inspired by the idea of employing music to promote peace and build bridges between people. Music can be fitting for every event in life, during both good and bad times. In it, I express pain, happiness, love, loss and grief and depict anything that I find interesting. My music tells the history of my life and the daily things that happen around me - not only reflecting the innate workings of my mind, but also the effects of external happenings. Animal rights and global warming among others are issues on my mind as I garner the creativity to compose. Being a vegetarian, my love of nature and the animals of the world are never forgotten. Some of my compositions are about personal struggles (both family-related and private) while others are about life, national identity, war and peace, borders between people, bridges between people, and the universal struggle to survive – here I would like to make it clear that classical music does not belong to any specific ethnic or age group. Over a decade ago, I participated in the West Eastern Divan Orchestra conducted by Daniel Barenboim in Chicago and the Apple Hill Summer Chamber Music Workshop in New Hampshire, both with themes related to playing music for peace. For the past several years, I have had concerts scheduled in Beirut annually by the Lebanese National Higher Conservatory of Music – where I currently teach piano - as well as by local cultural organizations and Embassies, performing my own compositions and those of other classical and contemporary composers. Over the past three years, I have been invited to perform pieces by Armenian composers at an Armenian school’s gala event, the work of Spanish composers by the Embassy of Spain’s Instituto Cervantes, as well as British compositions at the British Embassy’s Queen’s Birthday Party.

Do you think there is a Lebanese musical trend ? Definitely, yes. Certainly, Lebanon has given rise to a rich culture. And music is one channel through which we exchange cultures. Given the large Lebanese diaspora, it is logical that there is interest in listening to the work of Lebanese composers both here and internationally. Humans by our nature are always interested in different cultures, traditions and places; that’s how evolution works. Carnegie Hall recently hosted the New England Symphonic Ensemble conducted by Joanna Medawar Nachef (recognized as the first female conductor from the Middle East) featuring several Lebanese classical Lebanese musicians. There are, of course, many genres of music composed and performed by Lebanese artists – your readers will already be familiar with the international press coverage and marketing of the work of Fairuz, the Rahbani Brothers, Elissa, Nancy Ajram and Wael Kfoury. Regarding classical musicians from Lebanon, readers may not be aware of the extraordinary Lebanese talents that perform not only here in Lebanon at Beirut Chants as well as the Beiteddine, Baalbeck, Byblos and Al Bustan Festivals, but on the global stage – many of their websites list international concert tours and master classes. These include flutist Wissam Bustany, trumpet player Ibrahim Maalouf (performing this November at the London Jazz Festival – he mixes jazz with Middle Eastern music tonalities), violinist Nidaa Abou Mrad, pianists Tatiana Primak Khoury and Guy Manoukian. Lebanese operatic singers including sopranos Mayssa Karaa (an alumna of the Berklee College of Music who recently performed at the 2015 Abu Dhabi Festival), Samar Salamé (2014 Bahrain International Music Festival), Caroline Solage, Marie-José Matar, Reem Deeb, Nadine Nassar, and Magida El Roumi; countertenor Matteo El Khodr (last December, he performed at the Festival of Saint-Chapelle in Paris), baritone Raymond Ghattas and bass-baritone (and conductor) Toufic Maatouk. Oriental music in also quite popular today – indeed, the Lebanese National Conservatory has two orchestras: the Oriental, which includes oud and durbakke, and the Philharmonic. Outstanding Lebanese oud players include Ziad El Ahmadieh as well as Charbel Rouhana (performing in Abu Dhabi in November) and Ebrahim Farchoukh, while Oriental singers include Rima Khcheich (she performed at the 2015 Cairo Jazz Festival as her work is a fusion of traditional Arabic with jazz elements), Abeer Nehme (traditional Tarab music), Ghada Shbeir (she performed recently in Manama, Bahrain), and Hiba Tawaji. Several contemporary Lebanese composers are equally known for their performances and regularly appear at concerts and festivals. These include: Abdel Rahman El Bacha (pianist), Naji Hakim (organist), Marcel Khalifé (oud) and Zad Moultaka (pianist). Lebanese composers most known for their work with orchestras and recordings include Béchara El Khoury as well as Ghadi and Oussama Rahbani. Finally, composer Gabriel Yared is best known for his scores for cinema in France and the US.

Copyright © Da Vinci Publishing All rights reserved. No part of this publication may be reproduced stored in a retrieval system or transmitted in any form or by any means, electronic, mechanical, photocopying or otherwise without the written permission of the publisher.

Sorry, there's no reviews of this score yet. Please .
In order to submit this score to ScoreExchange.com Sevag Derghougassian has declared that they own the copyright to this work in its entirety or that they have been granted permission from the copyright holder to use their work. If you believe that this score should be not available here because it infringes your or someone elses copyright, please report this score using the copyright abuse form.