By: Johann Pachelbel (1653-1706) Arranged by Keith Terrett
For: Octet
This music is in your basket
View basket
Loading... 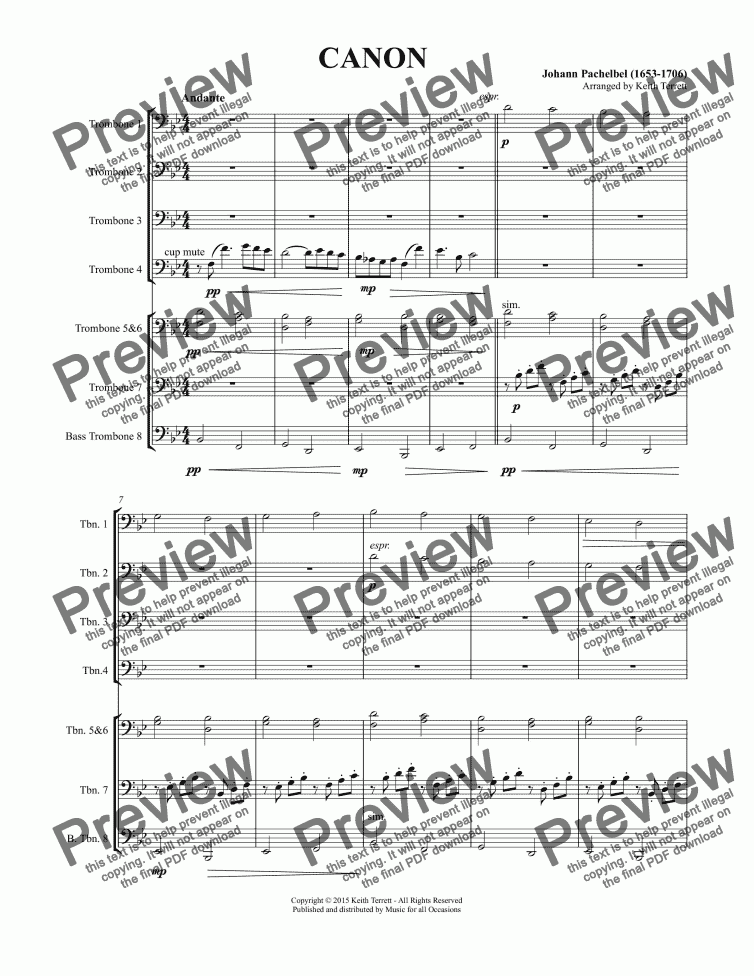 Composer
Johann Pachelbel (1653-1706) Arranged by Keith Terrett
Arranger
Keith Terrett
Publisher
Music for all Occasions
Difficulty
Difficult (Grades 7+)
Duration
6 minutes
Genre
Classical music
License details
For anything not permitted by the above licence then you should contact the publisher first to obtain permission.

An arrangement of the famous Canon for Trombone Octet.

In his lifetime, Pachelbel was renowned primarily for his organ and other keyboard music, whereas today he is also recognized as an important composer of church and chamber music. Little of his chamber music survives, however. Only Musikalische Ergötzung—a collection of partitas published during Pachelbel's lifetime—is known, apart from a few isolated pieces in manuscripts. The Canon and Gigue in D major is one such piece. A single 19th-century manuscript copy of them survives, Mus.MS 16481/8 in the Berlin State Library. It contains two more chamber suites. Another copy, previously in Hochschule der Künste in Berlin, is now lost. The circumstances of the piece's composition are wholly unknown. One writer hypothesized that the Canon may have been composed for Johann Christoph Bach's wedding, on 23 October 1694, which Pachelbel attended. Johann Ambrosius Bach, Pachelbel, and other friends and family provided music for the occasion. Johann Christoph Bach, the oldest brother of Johann Sebastian Bach, was a pupil of Pachelbel.

The Canon (without the accompanying gigue) was first published in 1919 by scholar Gustav Beckmann, who included the score in his article on Pachelbel's chamber music. His research was inspired and supported by renowned early music scholar and editor Max Seiffert, who in 1929 published his arrangement of the Canon and Gigue in his Organum series. However, that edition contained numerous articulation marks and dynamics not in the original score. Furthermore, Seiffert provided tempi he considered right for the piece, but that were not supported by later research. The Canon was first recorded in 1940 by Arthur Fiedler, and a popular recording of the piece was made in 1968 by the Jean-François Paillard chamber orchestra.