I Am a Poor Wayfaring Stranger

By: Traditional
For: Choir + keyboard
This music is in your basket
View basket
Loading... 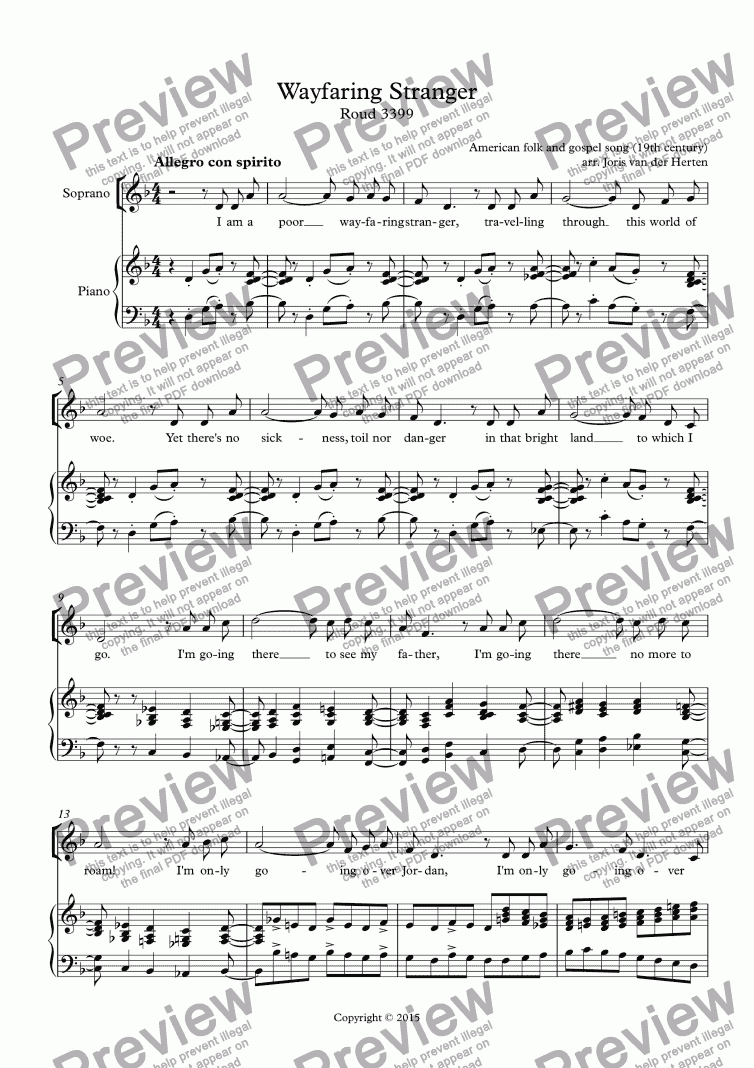 I Am a Poor Wayfaring Stranger

By: Traditional
For: Choir + keyboard

Composer
Traditional
Year of composition
1850
Arranger
Joris van der Herten
Year of arrangement
2015
Difficulty
Easy (Grades 1-3)
Duration
2 minutes
Genre
Classical music
License details
For anything not permitted by the above licence then you should contact the publisher first to obtain permission.

In the days of the American Revolution the people of the southern Appalachian Mountains lived lives of enormous hardships, struggling to survive in an environment of often-rugged wilderness terrain, few supplies, and the frequent loneliness of isolation. Wayfaring Stranger is typical of many of the spiritual songs of the time, expressing the pain and hardship of daily life, while dreaming and hoping for a bright and beautiful life after death.

The immigrants of the region were mostly English, Scottish, Irish, and Welsh, but there was also a mysterious group known as Melungeons. Sometimes called the Black Dutch, the Melungeons are often said to be of Portuguese descent, though their precise lineage is still a mystery, varies much, and is a complex mixture thought to include Native American, African (including Bantu), and some Mediterranean, with Turkish as a favorite. In recent years much research has begun to yield more clues to the Melungeons’ origins and history. They appear to have been semi-nomadic, generally moving inward from the Atlantic coast in search of more favorable social conditions. Probably because of this, Wayfaring Stranger has become associated with Melungeon history.

Like most early American songs, there were hundreds or even thousands of variations of Wayfaring Stranger. University of Georgia Professor Emeritus of Chemistry and published music researcher John F. Garst has extensively studied the song’s history. His article, "Poor Wayfaring Stranger" ­ Early Publications," was published in 1980 in the journal, The Hymn (31 (2): 97­101). Having examined hundreds of early versions of Wayfaring Stranger, he mentions that the song has an oral history that probably dates back to the 1780s. He then goes on to describe its history in hymnals from the mid-1800s into the early 20th Century.