By: Ludvig van Beethoven
For: Clarinet choir
This music is in your basket
View basket
Loading... 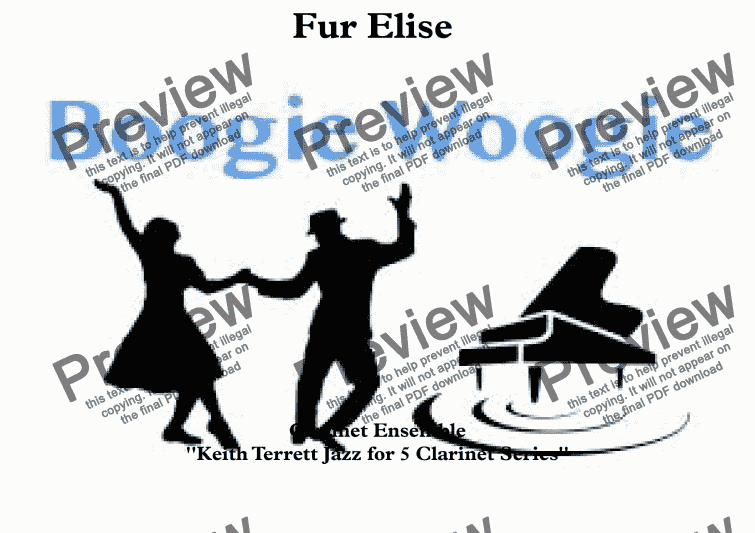 Composer
Ludvig van Beethoven
Year of composition
1810
Arranger
Keith Terrett
Year of arrangement
2016
Publisher
Music for all Occasions
Difficulty
Moderate (Grades 4-6)
Duration
3 minutes
Genre
Jazz music
License details
For anything not permitted by the above licence then you should contact the publisher first to obtain permission.

Für Elise Boogie Woogie arranged for Clarinet Quintet. Thanks to Clarinet Fusion (a San Fransisco based Clarinet Ensemble); for the excellent live recording shared with me.

There are alternate parts, in case you have more then five players and want to double up some of the parts such as the Eb Alto, which has Bb 4 to cover if required. There are also parts for Bb Bass & Contrabass Clarinets.

Below is a link to Clarinet Fusion:http://www.clarinetfusion.org

Kopitz presents the finding by the German organ scholar Johannes Quack that the letters that spell Elise can be decoded as the first three notes of the piece. Because an E♭ is called an Es in German and is pronounced as "S", that makes E–(L)–(I)–S–E: E–(L)–(I)–E♭–E, which by