The Name of Jesus (THE BELLMAN’S SONG) SATB Hymn

By: Traditional English
For: Choir
This music is in your basket
View basket
Loading... 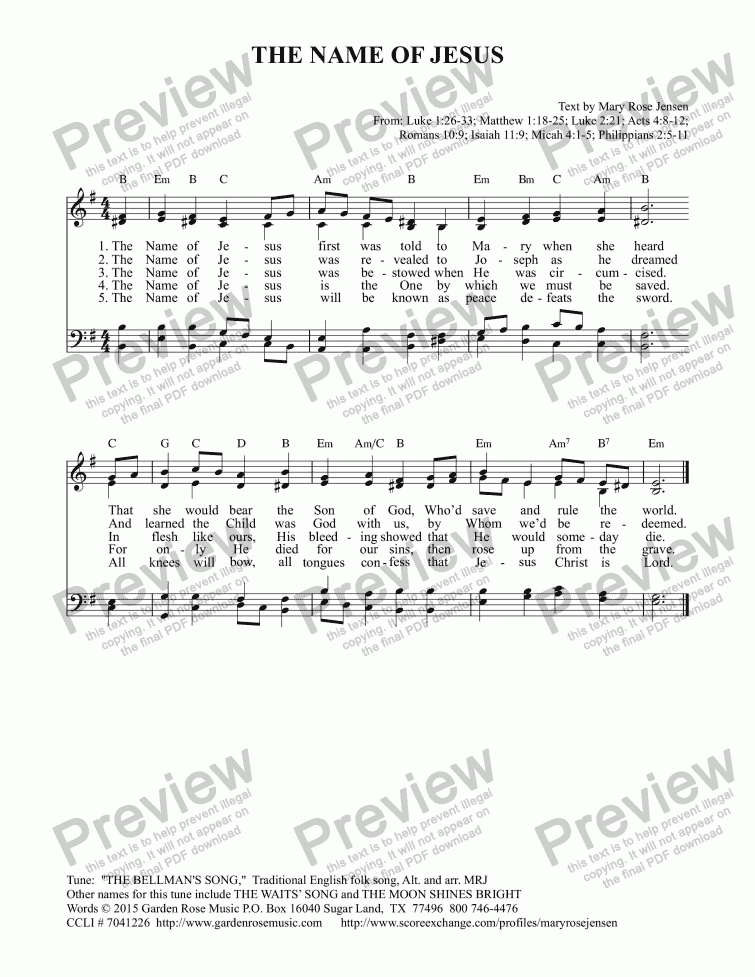 The Name of Jesus (THE BELLMAN’S SONG) SATB Hymn

By: Traditional English
For: Choir
(+ VAT when applicable)
Note: The publisher requires a minimum purchase of 1 licenses
This music is in your basket
View basket

This English tune is old, usually paired with the lyrics "The moon shines bright." It may go back to the time of Shakespeare, as there are possible references to a similar lyric in his plays. Another name for this tune is WAITS’ SONG. But there is another tune that also uses that name, so I’ve followed the example of the Oxford Book of Carols in calling it THE BELLMAN’S SONG. Both Bellman and Wait may refer to some sort of musical watchman. The English folk song "The Moon Shines Bright" was traditionally sung on New Year’s Day.

I wrote these words in response to our pastor’s New Year’s Day sermon on the circumcision and naming of Jesus. Since circumcision was done 8 days after a baby’s birth, the church has traditionally celebrated the circumcision and naming of Jesus on Jan.1, New Year’s Day. This hymn, "The Name of Jesus" is appropriate for such services, or other times of the year when there is mention of any of the topics found in the text, or scriptures that are listed as references. Ascension Day, Christ the King Sunday, the Annunciation, Advent and Christmas are all possible times for this hymn in addition to New Year’s Day.

"The Name of Jesus" is one of the new hymns on the web site, "Singing the Faith Plus," a supplement to the hymnal of UK Methodists: http://www.singingthefaithplus.org.uk/?p=14301

The lyrics of the folk song include this verse:

"Today you may be alive and well,

Worth many a thousand pound;

Tomorrow dead and cold as clay,

This was apparently considered a good New Year’s text. The song concludes with the words: "A joyful New Year."

Sorry, there's no reviews of this score yet. Please .
In order to submit this score to ScoreExchange.com Mary Rose Jensen has declared that they own the copyright to this work in its entirety or that they have been granted permission from the copyright holder to use their work. If you believe that this score should be not available here because it infringes your or someone elses copyright, please report this score using the copyright abuse form.