By: Words & Music by Duke Ellington & Billy Strayhorn
For: Brass quintet
This music is in your basket
View basket
Loading... 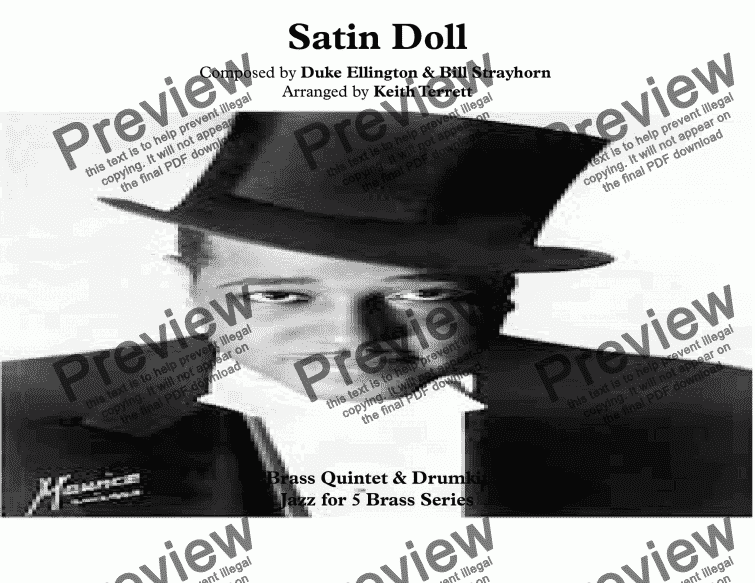 Composer
Words & Music by Duke Ellington & Billy Strayhorn
Year of composition
1953
Arranger
Keith Terrett
Year of arrangement
2015
Publisher
Music for all Occasions
Difficulty
Moderate (Grades 4-6)
Duration
2 minutes
Genre
Jazz music
License details
For anything not permitted by the above licence then you should contact the publisher first to obtain permission.

An arrangement of Satin Doll by Duke Ellington & Billy Strayhorn for Brass Quintet.

"Satin Doll" is a jazz standard written by Duke Ellington and Billy Strayhorn with lyrics by Johnny Mercer. Written in 1953, the song has been recorded countless times, by such artists as Ella Fitzgerald, Frank Sinatra, 101 Strings, Terry Callier, and Nancy Wilson. Its chord progression is well known for its unusual use of chords and opening with a ii-V-I turnaround.

Johnny Mercer was often asked to write lyrics to already popular songs. The lyrics to "Satin Doll" were written after the song was already a hit in its instrumental version. Ellington used "Satin Doll" as the closing number at most of his concerts.

The Coasters released a version of the song on their 1960 album, One by One.

The popular 1950s group The Gaylords recorded a version of "Satin Doll" in 1958.

The American vocal group The Stylistics recorded a cover version for their 1976 album, Once Upon a Juke Box.

Although Ellington originally wrote the melody for “Satin Doll,” in his biography of Billy Strayhorn, Lush Life: A Biography of Billy Strayhorn, David Hajdu says, “Strayhorn fleshed out an Ellington riff sketch with harmony and lyrics …” and titled it “Satin Doll,” Strayhorn’s pet name for his mother. Strayhorn’s lyrics were not considered commercially viable, and five years later, lyricist and cofounder of Capitol Records, Johnny Mercer wrote new lyrics, resulting in the song we know today.

Whether the “Satin Doll” is Strayhorn’s mother or not is up for speculation. In the Mercer Ellington/Stanley Dance biography, Duke Ellington in Person: An Intimate Memoir, Mercer suspects Beatrice “Evie” Ellis or Evie Ellington, Duke’s common-law wife, is the mystery woman. Mercer is quoted as saying, “… she disclosed that ‘Satin Doll’ was really written for her…” Mercer then supports her claim saying, “…Pop would always be leaving notes in the house addressing her affectionately as “Dearest Doll,” “Darling Doll,” and so on.”

As a rule, Billy Strayhorn is credited with assisting Ellington with the music but not contributing to the Johnny Mercer lyrics. In the early 1990’s, however, a copyright infringement case (Tempo Music vs. Famous Music) was brought against the Strayhorn Estate by the Ellington Estate. Basically the Ellington Estate felt that because Strayhorn’s contribution to the music was only the harmonization of Ellington’s melody and that harmonic progressions are not sufficient to constitute copyrightable expression, the Strayhorn Estate should receive proceeds only from versions published with lyrics.

The court ruled in favor of the Strayhorn Estate, saying, “While we agree that melody generally implies a limited range of chords which can accompany it, a composer may exercise creativity in selecting among these chords…”

Beyond the legal implications to jazz musicians, who routinely reuse harmonic progressions, the above phrase, “should receive proceeds only from versions published with lyrics,” implied the Ellington Estate believed Strayhorn contributed to the Johnny Mercer lyrics, a fact also stated in the book Beyond Category: The Life and Genius of Duke Ellington by John Edward Hasse.

Among Ellington compositions, “Satin Doll” is unique in that it was not written with a particular soloist in mind, Ellington himself taking the introductory piano solo in the 1953 recording. Further differentiating “Satin Doll” from many other Ellington top jazz standards are the critically acclaimed lyrics. Johnny Mercer’s (and Billy Strayhorn’s) words are clever, hip, and slangy, almost beyond belief.

The repetitive “A” section melody sounds suspiciously as if it began life as a “riff” or background figure that section players use as accompaniment to a soloist (similar to an ostinato). Section “B” is a bit more developed, based on a scale pattern that descends a fourth and then ascends back up a fourth. The chord progression of “A” is interesting because it starts out with a harmonic sequence often used as a “turnaround” at the end of a tune–ii7 – V7 – ii7 – VI7. The fifth and sixth measures of “A” almost defy analysis. If a composer following the classical rules of voice leading had written the harmonic progression here, it would have been II7 (or ii7) – V7(#9)– I (D7 or Dm7 – G7(#9) – Cma7 in the original). Instead, the chords used seem completely coloristic and yet disguise the voice-leading function definitely present when looked at closely. In the fifth measure, the first chord written is Am7(b5)/Eb (which could have been written as an Ebø7–and actually is), which proceeds to the D7 – the II7 we would expect to find there. The next chord, however, is Abm9, which resolves to Db9. Under normal circumstances, one would think of this as a ii7 – V7 – I in Gb, but really what has happened is that the Abm9 has been an embellishment of the “Neapolitan” chord (in the key of C, a Db7) which is nothing more than a tri-tone substitution for V7. Indeed, proper voice-leading technique is still present, albeit disguised almost beyond recognition.

Section “B” is more orthodox sounding: ii7 – V7 – I in F and G major. Transition back to section “A” is accomplished by dropping the middle three voices of the G7 chord a half-step, creating a vii˚7/ii in the original tonic key of C major.

Original Key C major with temporary false key changes to F major and G major during the bridge Form A – A – B – A Tonality Primarily major Movement Almost completely stepwise; only occasional skips

Really like the way Keith arranges Satin Doll by the Duke, for just five brass; with great jazz harmony.

This is really a fantastic chart for Classical Brass Quintets to add to their repertoire. Solos are all written out, so no need to improvise!

Will make a great piece for a concert, gig, dinner music, schools concert when you want to chill out and play a little swing music!

I note there are other titles in this series such as Hello Dolly, Pennsylvania 65000, Little Brown Jug, Moon River, Puff the Magic Dragon, C Jam Blues & Battle Hymn of the Republic!!