By: Barney Bigard/ Duke Ellington? Arranged by Keith Terrett
For: Brass quintet
This music is in your basket
View basket
Loading... 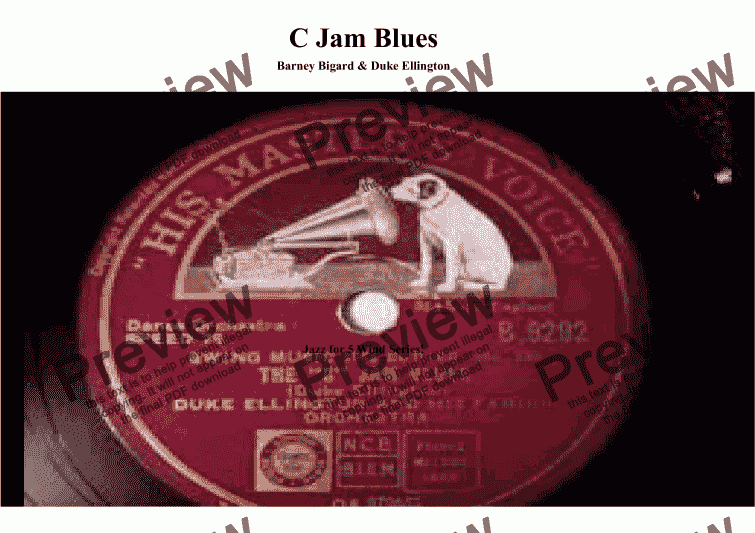 Composer
Barney Bigard/ Duke Ellington? Arranged by Keith Terrett
Arranger
Keith Terrett
Publisher
Music for all Occasions
Difficulty
Moderate (Grades 4-6)
Duration
2 minutes
Genre
Jazz music
License details
For anything not permitted by the above licence then you should contact the publisher first to obtain permission.

An arrangement of C Jam Blues for Brass Quintet.

New Orleans-born clarinetist Barney Bigard is likely the originator of this tune, a simple blues riff in the key of C. Since Bigard was a veteran member of Duke Ellington’s Orchestra in 1941, Duke had a slice of the pie, too, and undoubtedly arranged the piece for the orchestra. Yet Duke referred to the number somewhat disparagingly as “one of our more or less trite things.”

The number was introduced in a Soundie short film. These three-minute features, produced to be shown on a jukebox-type player, illustrated the band miming to a pre-recorded performance. Entitled “Jam Session” the Soundie was filmed late in 1941 along with four other Ellington numbers. Duke introduces various band members, who then solo: Ray Nance (violin), Ben Webster (tenor sax), Rex Stewart (cornet), Joe “Tricky Sam” Nanton (trombone), and Sonny Greer (drums). The complete ensemble carries the tune to its finish with composer Bigard (clarinet) providing some improvised upper register piping.

“C Jam Blues” was formally recorded under that title in January, 1942, for RCA Victor Records. It continued be a staple of the Ellington repertoire, generally featuring a handful of the soloists in the band.

Co-composer Barney Bigard left Duke’s band in June 1942, and after a period of freelancing joined Louis Armstrong’s All-Stars in August, 1947. “C Jam Blues” was one of his nightly features with Satch’s ensemble along with “Tea for Two.” Despite playing the tune hundreds, or perhaps even thousands of times during his tenure with Ellington and Armstrong, he continued to perform it during his freelance years in the 1950s until shortly before his death in 1980.

In the late-1950s very simple words were added (“Baby, let’s go down to ‘Duke’s Place’,” etc.) which strangely took a three-member team of writers to assemble: songwriters William Katz and Ruth Roberts and record producer Bob Thiele. Clarinetist Barney Bigard was not included in the composer credits of the song version, although he was a member of Louis Armstrong’s All-Stars when they recorded “Duke’s Place,” featuring Louis on the vocal, with Ellington in 1961.

The piece typically features several improvised solos. The final solo continues in the upper register as the entire ensemble comes in and the music grows to a climax. The melody likely originated from the clarinetist Barney Bigard in 1941, but its origin is not perfectly clear.

It was also known as "Duke’s Place", with lyrics added by Bill Katts, Bob Thiele and Ruth Roberts Western Swing band leader Bob Wills and His Texas Playboys recorded the song sometime between mid-1945 through 1947 as part of the Tiffany Transcriptions.