By: Ludvig van Beethoven Arranged by Keith Terrett
For: Quintet of Euphoniums in C [bass clef]
This music is in your basket
View basket
Loading... 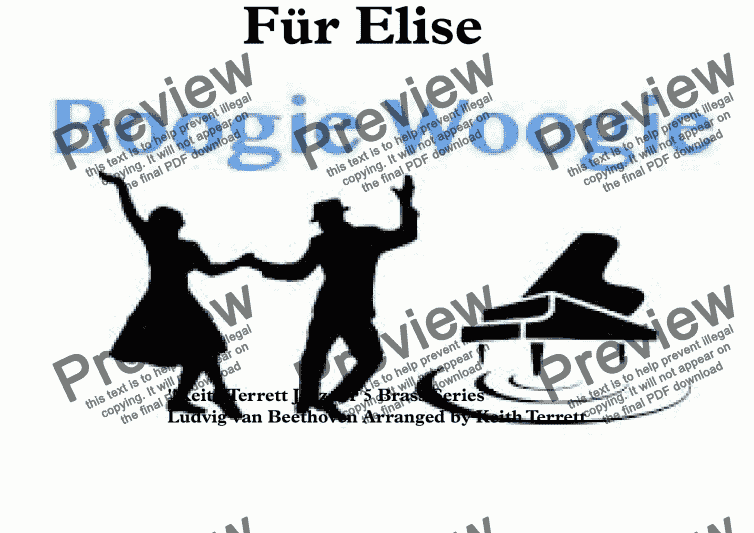 By: Ludvig van Beethoven Arranged by Keith Terrett
For: Quintet of Euphoniums in C [bass clef]

Composer
Ludvig van Beethoven Arranged by Keith Terrett
Arranger
Keith Terrett
Publisher
Music for all Occasions
Difficulty
Moderate (Grades 4-6)
Duration
4 minutes
Genre
Jazz music
License details
For anything not permitted by the above licence then you should contact the publisher first to obtain permission.

An arrangement for Tuba Quintet of Fur Elise, set in a Boggie Woogie style.

Bagatelle No. 25 in A minor (WoO 59 and Bia 515) for solo piano, commonly known as "Für Elise" or "Fuer Elise" (German: [fyːʁ eːˈliːzə] ( listen), English: "For Elise", commonly written without Germanic umlaut marks as "Fur Elise"), is one of Ludwig van Beethoven’s most popular compositions. It is usually classified as a bagatelle, but it is also sometimes referred to as an Albumblatt.

History:The score was not published until 1867, 40 years after the composer’s death in 1827. The discoverer of the piece, Ludwig Nohl, affirmed that the original autographed manuscript, now lost, was dated 27 April 1810.

Therese Malfatti, widely believed to be the dedicatee of "Für Elise". The pianist and musicologist Luca Chiantore (es) argued in his thesis and his 2010 book Beethoven al piano that Beethoven might not have been the person who gave the piece the form that we know today. Chiantore suggested that the original signed manuscript, upon which Ludwig Nohl claimed to base his transcription, may never have existed. On the other hand, the musicologist Barry Cooper stated, in a 1984 essay in The Musical Times, that one of two surviving sketches closely resembles the published version