By: Ludvig van Beethoven
For: Quintet of Trombones
This music is in your basket
View basket
Loading... 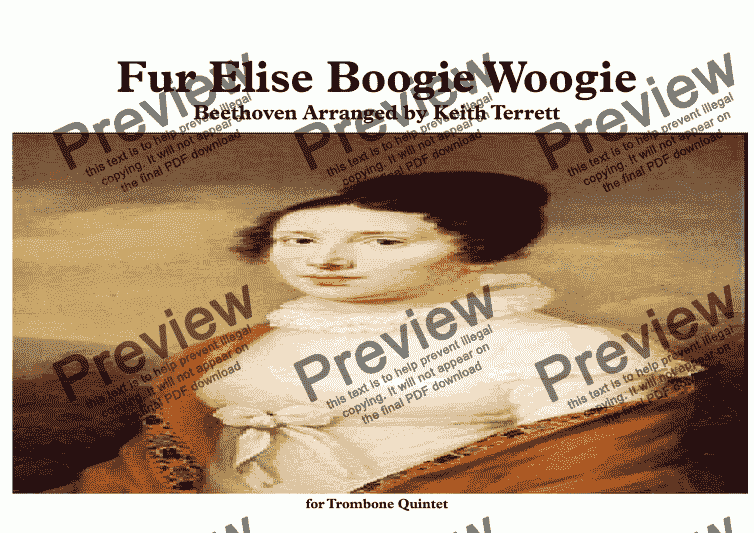 By: Ludvig van Beethoven
For: Quintet of Trombones

Composer
Ludvig van Beethoven
Year of composition
1810
Arranger
Keith Terrett
Year of arrangement
2015
Publisher
Music for all Occasions
Difficulty
Moderate (Grades 4-6)
Duration
4 minutes
Genre
Jazz music
License details
For anything not permitted by the above licence then you should contact the publisher first to obtain permission.

An arrangement of Fur Elise for Trombone Quintet, arranged in a boogie woogie style. Great audience pleaser for your next concert!

Bagatelle No. 25 in A minor (WoO 59 and Bia 515) for solo piano, commonly known as "Für Elise", is one of Ludwig van Beethoven's most popular compositions. It is usually classified as a bagatelle, but it is also sometimes referred to as an Albumblatt.

The score was not published until 1867, forty years after the composer's death in 1827. The discoverer of the piece, Ludwig Nohl, affirmed that the original autograph manuscript, now lost, had the title: "Für Elise am 27 April [1810] zur Erinnerung von L. v. Bthvn" ("For Elise on April 27 in memory of L. v. Bthvn"). The music was published as part of Nohl's Neue Briefe Beethovens (New letters by Beethoven) on pages 28 to 33, printed in Stuttgart by Johann Friedrich Cotta.

The version of "Für Elise" heard today is an earlier version that was transcribed by Ludwig Nohl. There is a later version, with drastic changes to the accompaniment which was transcribed from a later manuscript by the Beethoven scholar Barry Cooper. The most notable difference is in the first theme, the left-hand arpeggios are delayed by a 16th note. There are a few extra bars in the transitional section into the B section; and finally, the rising A minor arpeggio figure is moved later into the piece. The tempo marking Poco moto is believed to have been on the manuscript that Ludwig Nohl transcribed (now lost). The later version includes the marking Molto grazioso. It is believed that Beethoven intended to add the piece to a cycle of bagatelles.

Whatever the validity of Nohl's edition, an editorial peculiarity contained in it involves the second right hand note in bar 7, that is, the first note of the three-note upbeat figure that characterizes the main melody. Is it E4 or D4? Nohl's score gives E4 in bar7 but D4 thereafter in all parallel passages. Many editions change all of the figures to beginning with E4 until the final bars, where D4 is used and resolved by adding a C to the final A octave.

The pianist and musicologist Luca Chiantore [es] argued in his thesis and his 2010 book Beethoven al piano (new Italian edition: Beethoven al pianoforte, 2014) that Beethoven might not have been the person who gave the piece the form that we know today. Chiantore suggested that the original signed manuscript, upon which Ludwig Nohl claimed to base his transcription, may never have existed. On the other hand, Barry Cooper wrote, in a 1984 essay in The Musical Times, that one of two surviving sketches closely resembles the published version.

The piece can be heard as a five-part rondo, with the form A-B-A-C-A. It is in A minor and in 3 8 time. It begins with the refrain A, a flowing melody in binary form marked Poco moto (literally "a little motion," a tempo indication that does not appear elsewhere in Beethoven's works), with an arpeggiated left hand accompaniment. The unaccompanied oscillation between the dominant E and its chromatic lower neighbor D-sharp that begins the melody has become one of the most recognizable openings in classical music, but it also serves as a main topic of musical discussion. The digression at measure 9 glances at the relative major before returning to the original theme and key, preceded by a prolongation of the dominant, E that extends the opening lower-neighbor oscillation. The pitch outline of these bars, E-F-E-D-C-B, i.e. an upper-neighbor ascent to F5 followed by a descending scale, also forms the basis of the two episodes B and C, thus unifying the piece. The B section is in the submediant, F major. Its theme begins by tracing the outline mentioned above in somewhat elaborated fashion and modulates to the dominant, followed by 32nd-note runs repeating a cadential progression in C major in a codetta-like passage. (The chordal three-note upbeats in the left hand have been anticipated by the transition to this episode in bar 22, a clever unifying touch.) This suggests a rather expansive form, but Beethoven suddenly returns to the dominant of A minor in bar 34, once again lingering on the dominant E and its lower neighbor and leading to an exact repeat of the A section. Although another nominal episode follows © at bar 59, it does not leave the tonic and is rather coda-like in feel, unfolding over a dramatic, throbbing tonic pedal in the bass and emphatically cadencing in the home key. Once again, there are unifying relationships with previously heard material. The melody retraces the descending outline alluded to earlier, and the cadence in bars 66-67 is an augmented version of the theme's cadence in bars 7-8. After a glance at a Neapolitan harmony (B-flat major) and a cadence at bar 76 that brings the music to a complete halt for the first and only time, an ascending A minor arpeggio and a chromatic descent over two octaves follows, sort of a cadenza in tempo, leading to a final repetition of the A section. The piece concludes without an added postlude.

Kopitz presents the finding by the German organ scholar Johannes Quack [de] that the letters that spell Elise can be decoded as the first three notes of the piece. Because an E♭ is called an Es in German and is pronounced as "S", that makes E–(L)–(I)–S–E: E–(L)–(I)–E♭–E, which by enharmonic equivalents sounds the same as the written notes E–(L)–(I)–D♯–E.