By: Joel Jacklich
For: Concert band / wind band
This music is in your basket
View basket
Loading... 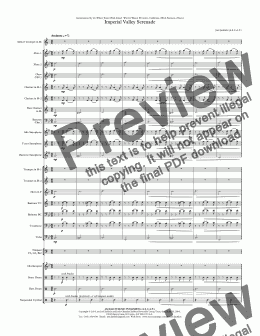 Composer
Joel Jacklich
Year of composition
2014
Publisher
Jacklich Music Publishing
Difficulty
Moderate (Grades 4-6)
Duration
2 minutes
Genre
Jazz music
License details
For anything not permitted by the above licence then you should contact the publisher first to obtain permission.

In the fall of 2014, I was commissioned to write a work by Mitch Sturman, the director of the Wilson Junior High School “Warrior” Band in El Centro, California. At the time of commissioning, he had several suggestions for the work:

1.) that it be named “Imperial Valley Serenade,”

2.) that, since the Imperial Valley is in California, i.e., in the “West,” that there be a “Western” (as in cowboy) element to the work, referencing such Imperial Valley things as the Cattle Call Rodeo, etc.,

3.) that, like the 1941 movie “Sun Valley Serenade” starring Sonja Henie, and featuring the Glenn Miller Orchestra, that there be a hint of big band or jazz in the work.

For the Western “feel” I used the trite and overused “clip-clop” pattern in the intro and as accompaniment for the “A” section. For the “big band” or “jazz” feel, I used an imitation of a “blue note” in the solo trumpet part in the “B” section, as well as the “ratta-ta-tatta-ta” pop and big band device of the 40s, 50s, and early 60s to close out the “B” section.

The result is the “Imperial Valley Serenade.” BTW, besides the original for solo trumpet and band, versions are available where the soloist can be flute, oboe, clarinet, bassoon, alto sax, tenor sax, French horn, baritone horn, trombone, or tuba.

The original version for solo trumpet and band was premiered on Thursday, May 21, 2015 at the 8th Annual “Concert of Premieres” at the Wilson Junior High School Gymnasium in El Centro, California, by the Wilson band with trumpet soloist Precious Esquer conducted by the composer.