The Indian National Anthem arranged for String Orchestra. There are versions for Brass Quintet, Band & full Orchestra in store.

"Jana Gana Mana"[α] is the national anthem of India. Written in highly Sanskritised (Tatsama) Bengali, the first of five stanzas of a Brahmo hymn composed and scored by Nobel laureate Rabindranath Tagore. It was falsely propagated by colonial authorities that the song was written and first sung to praise and felicitate King George V and Queen Mary on their visit to India in 1911. The rumors gave way when Tagore wrote a letter to the Emperor, stating the mentor and creator of Bharath(India) mentioned in the song is not King George V but God himself. The copy of the letter can be found in his autobiography and Jana Gana Mana (hymn) . "Jana Gana Mana" was officially adopted by the Constituent Assembly as the Indian national anthem on 24 January 1950.

The original poem written by Rabindranath Tagore was translated into Hindi-Urdu by Abid Ali. The original Hindi version of the song Jana Gana Mana, translated by Ali and based on the poem by Tagore, was a little different. It was "Subh Sukh Chain Ki Barkha Barse, Bharat Bhaag Hai Jaaga….".

A formal rendition of the national anthem takes fifty-two seconds. A shortened version consisting of the first and last lines (and taking about 20 seconds to play) is also staged occasionally. Tagore wrote down the English translation of the song and along with Margaret Cousins (an expert in European music and wife of Irish poet James Cousins), set down the notation at Madanapalle in Andhra Pradesh, which is followed only when the song is sung in the original slow rendition style of singing. However, when the National Anthem version of the song is sung, it is often performed in the orchestral/choral adaptation made by the English composer Herbert Murrill at the behest of Nehru. An earlier poem by Tagore (Amar Sonar Bangla) was later selected as the national anthem of Bangladesh.

All national anthems are available for string orchestra on request. 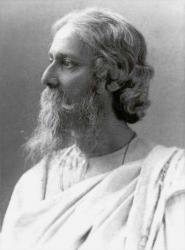