By: KENNETH J ALFORD arr. Philip R Buttall
For: Quartet of Bassoons
This music is in your basket
View basket
Loading... 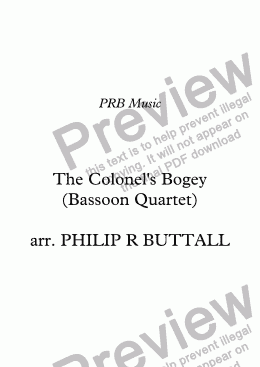 Supposedly, the tune was inspired by a military man and golfer who whistled a characteristic two-note phrase (a descending minor third interval, instead of shouting ’Fore!’. It is this descending interval that begins each line of the melody. The name Colonel Bogey began in the later 19th century as the imaginary "standard opponent" of the Colonel Bogey scoring system in golf, and by Edwardian times the Colonel had been adopted by the golfing world as the presiding spirit of the course. Edwardian golfers on both sides of the Atlantic often played matches against ’Colonel Bogey’. ’Bogey’ is now a golfing term meaning ’one over par’.

I have kept essentially to Alford’s original, but, just to spice things up a little (hopefully!), I have not only found that the main theme can fit at other places in the piece, but I also couldn’t resist the urge just to give one of the bassoons something different to play at times - and especially something which kind of links Alford with his American counterpart, Sousa, just near the end.

I have made extensive use of the Tenor Clef in parts 1-3, but for anyone who still profers the bass clef, I can always include a version