By: Paul John Stanbery 2015
For: Choir + orchestra
This music is in your basket
View basket
Loading... 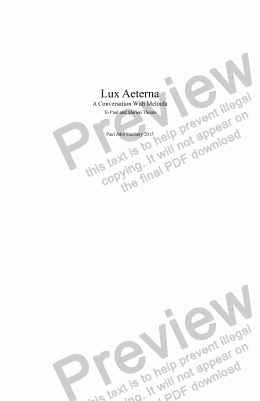 Composer
Paul John Stanbery 2015
Publisher
independent contractor
Difficulty
Difficult (Grades 7+)
Duration
9 minutes
Genre
Modern classical music
License details
For anything not permitted by the above licence then you should contact the publisher first to obtain permission.

The commission to compose a new piece came from my good friends, Paul and Marion Thoms. Their daughter Melinda was tragically killed in an accident in the early ‘90s, just before I had met them. “Lux Aeterna” (Eternal Light) is an attempt to honor Melinda’s memory, and hopefully aid in healing the broken hearts of they who mourn. How does one respond? As a parent, one cannot imagine anything more pain filled than the loss of a child. That’s not supposed to happen. The best one can hope for is acceptance, and to know that our child is alright, wherever they are. Prayer is all we have and can be a consolation, but one would think “if only we could once again speak………..” Melinda was a fine cellist, amongst other things, and was the youngest member ever to play with the Hamilton-Fairfield Symphony. The orchestration is standard with optional chorus, and the addition of two cello parts (three altogether) as a way of acknowledging Melinda’s talent. Lux Aeterna is a conversation between parent (they who mourn) and child. A little story is set forth as a basis for that conversation. As such, this is “program music”. One first encounters the Eternal in the form of Heavenly Light (Lux aeterna-eternal light, using a nine part string section). Angels are heard high above in the woodwinds, talking with one another, which ushers in the sad chant of they who mourn. The Angels hear but do not respond, continuing to talk only to one another. The mourners try again, slightly higher, encountering again the blindingly beautiful eternal light. The Angels are heard once more, interrupted higher and louder by the mourners, impatient with the process. The voice of God is sensed in the sound of a solemn brass section, giving way to the chorus of Saints (they who were once here on Earth), as they intercede. The frantic sounding of chimes and bells (God’s doorbell) brings out an anxious and hopeful response from the mourners, who try their prayer once again. Strains of the Vaughan Williams hymn “For All the Saints” begin to be heard, amid the friendly atmosphere of light. Paul and Marion identified this particular hymn as one of their favorites, and possibly that of Melinda as well. The solemn voice of God is once again present, as if opening now some new portal. More of the melody is welcomed, and passed around the orchestra. The chorus (Saints-they who once were here on Earth) intone the final “Alleluia” from the hymn, and finally the voice of Melinda is heard, in the guise of a solo cello, her Earthly instrument. Soothing, beautiful light enwraps us at the conclusion.

Sorry, there's no reviews of this score yet. Please .
In order to submit this score to ScoreExchange.com Paul STANBERY has declared that they own the copyright to this work in its entirety or that they have been granted permission from the copyright holder to use their work. If you believe that this score should be not available here because it infringes your or someone elses copyright, please report this score using the copyright abuse form.