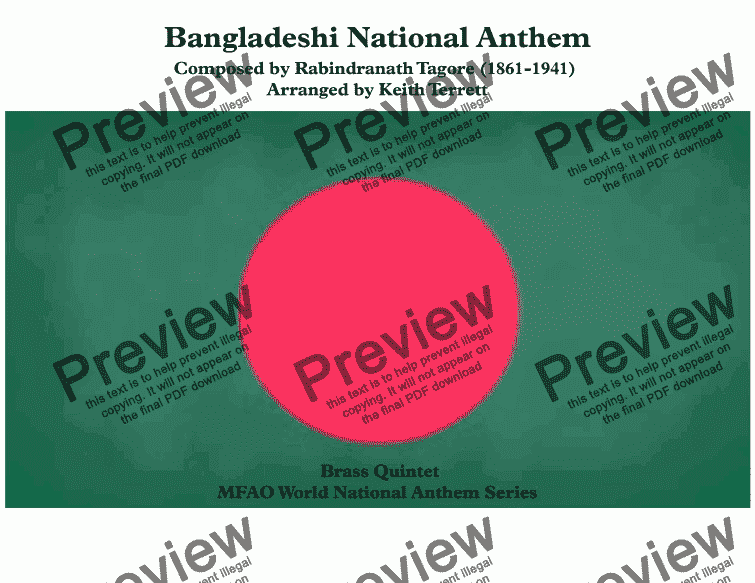 Arranged for Classical Brass Quintet, Amar Sonar Bangla (Bengali: আমার সোনার বাংলা, pronounced: [amar ʃonar baŋla] "My Golden Bengal") is the national anthem of Bangladesh. It is part of a Bengali song with the same title, written by Rabindranath Tagore in 1905. The word sonar literally means ’made of gold’, but in the song sonar Bangla may be interpreted to either express the preciousness of Bengal or refer to the colour of paddy fields before harvest.

The song was written in 1905 during the first partition of Bengal, when the ruling British Empire had an undivided India’s province of Bengal split into two parts; the decision was announced on 19 July by the then-Viceroy of India Lord Curzon, taking effect on 16 October. This divide of Bengal, being along communal lines–East Bengal having a majority of Muslims and West Bengal having a majority of Hindus–is claimed to have undermined India’s national movement against British imperialism and to have been politically motivated. Along with a host of others, songs such as this were meant to rekindle the unified spirit of Bengal, to raise public consciousness against the communal political divide.

The lyrics first appeared in the September issues of "Bongodorshon" and "Baul" simultaneously, in 1905. The song along with the musical notation (referred to as swaralipi in Bengali), first appeared in the periodical musical journal Shongeet Biggnan Probeshika in the same month and year. Indira Devi, Tagore’s niece, Satyendranath Tagore’s daughter, jotted down the musical notation hearing it from Tagore himself (this was the common norm, Tagore singing the song, and someone formally jotting down the musical notations). It is said that the music of this song was inspired by the Baul singer Gagan Harkara’s song "Ami Kothay Pabo Tare". (কোথায় পাবো তারে)

The first lines of this song constitute Bangladesh’s national anthem, adopted in 1971 during its liberation war. The instrumental orchestra rendition was composed by Samar Das. The English translation below was done by Syed Ali Ahsan. Another Brahmo hymn composed and scored by Tagore (Jana Gana Mana) was selected as the national anthem of India.

The Ministry of Cultural Affairs planned to stage an event on Bangladesh’s 44th independence day, in a bid to have the world record of the most people singing a national anthem simultaneously. Consequently, on 2 March, the ministry launched a program titled "Lakho Konthe Sonar Bangla" whose main objective was to hold an event with the cooperation of Bangladesh Armed Forces where approximately 300,000 people would sing the national anthem. Several popular Bangladeshi musicians and cultural groups later joined the program.

The record was broken at 11:20 on 26 March 2014 by 254,537 participants at Dhaka’s National Parade Ground. The event was attended by the Prime Minister of Bangladesh, the Speaker of Jatiyo Shangshad, and all the members of the cabinet. After receiving the required evidence, the Guinness Book of World Records approved the record on 9 April. 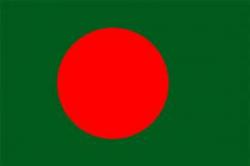