By: Composedd by Félix Astol Artés
For: Brass quintet
This music is in your basket
View basket
Loading... 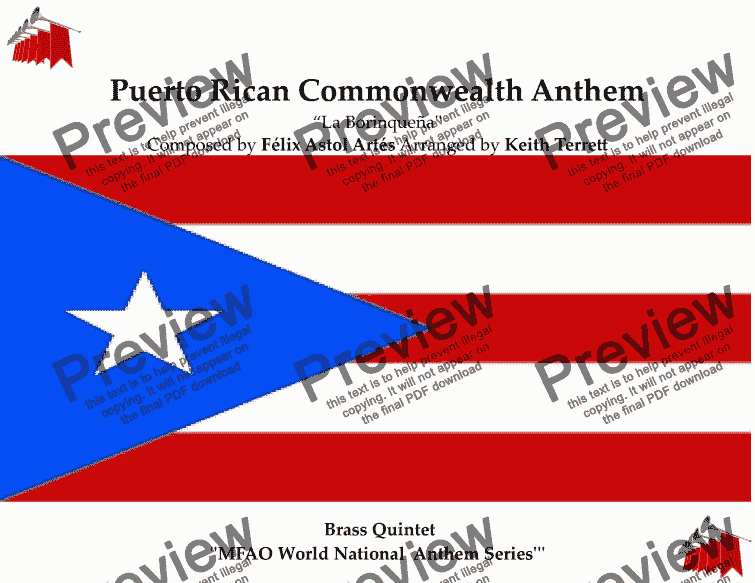 Composer
Composedd by Félix Astol Artés
Year of composition
1867
Arranger
Keith Terrett
Year of arrangement
2016
Publisher
Music for all Occasions
Difficulty
Moderate (Grades 4-6)
Duration
1 minute
Genre
Latin music
License details
For anything not permitted by the above licence then you should contact the publisher first to obtain permission.

La Borinqueña arranged for Brass Quintet is the commonwealth anthem of the Commonwealth of Puerto Rico. There are alternative versions for Symphony & String Orchestra in my stores.

After Puerto Rico became the "The Commonwealth of Puerto Rico" in 1952, the first elected governor, Luis Muñoz Marín, signed law #2 of July 24, 1952 that stated that the musical composition known as "La Borinqueña" was to become the official anthem of Puerto Rico. The words that go with the composition were approved by governor Carlos Romero Barceló on July 27, 1977, law #123. The title refers to the aboriginal Taíno name for the island of Puerto Rico, Borinkén or Borinquén

The music was originally credited to Félix Astol Artés in 1867 as an habanera danza, with romantic lyrics, but there is some evidence that Francisco Ramírez, a native of San Germán, wrote the music in 1860, and named it "La Almojábana". In 1868, Lola Rodríguez de Tió wrote a poem in support of the Puerto Rican revolution, which was set to the Ramirez/Astol Artés music. In fear of investigation by the Spanish insular government, Ramirez asked Astól to claim authorship of the music since he was a native of Catalonia and would therefore raise no suspicion.

After the cession of the island to the United States, the popular revolutionary lyrics of Lola Rodríguez de Tió were deemed too subversive for official adoption; therefore, a non-confrontational set of lyrics were written in 1903 by Asturias-born Manuel Fernández Juncos. The tune was officially adopted as the Commonwealth’s anthem in 1952 by governor Luis Muñoz Marín, and the words were officially adopted in 1977 by governor Carlos Romero Barceló.

The official version is played as a slow march, without the original tune’s initial paseo. Per the request of the new government, Ramón Collado rearranged the music in 1952 into a more military tune. Luis Miranda, the musical director of Puerto Rico’s 65th Infantry Regiment Band, adapted the tune to be played as a march in 1922. The 1977 law that adopted the words as an anthem merely stated that the anthem be played as a march, the tempo vaguely described as being in a "martial manner", but established no official arrangement for the music. An official revision made in 2003 leaves the tune as a march.

In 2012, Dr. Yajaira Sierra Sastre, an aspiring astronaut, collaborated in a variety of projects with the National Nanotechnology Infrastructure Network and the Cornell Nanoscale Facility, which included writing the smallest national anthem ever written, La Borinqueña Más Pequeña.

Fèlix Astol i Artés was born in Reus, in Catalonia, region of Spain in October 9, 1813, but he moved to Cuba in 1828 to evading military service. Forced to enlist, he joined the band of one of the battalions based in Havana. Once he graduated, he found employment doing tenor roles in an opera company that made its performances at the Teatro Tacón (Tacón Theatre). He toured in Puerto Rico by 1840, then returned to Cuba, where he lived. Later he joined the opera company of Stefano Busatti, that finally led him to Puerto Rico in 1860. When the company disappeared he moved to Mayagüez. In Mayagüez he founded a new company of comedies: Compañía Dramática Astol (The Astol Drama Company). Fèlix Astol, was author of several pieces of popular music, but his most famous work was the dance Bellísima trigueña (Georgeus brunette), composed in 1867. Conceived as a love song, it has had several versions throughout Latin America. In Cuba had the title of Mi amor (My love). In Brazil it was named Encantadora infancia (Lovely childhood). In Peru has two versions, one of them is named Bellísima peruana (Georgeus Peruvian). In Haiti is danced and in Venezuela is well known too. But the most popular version is "La Borinqueña", adopted as the official anthem of Puerto Rico.

The revolutionary lyrics written by Lola Rodíguez de Tió a year after the composition of the danza, became the popular anthem. It was a time of great turbulence in Puerto Rico, as a nationalist revolution against Spain was sweeping across the political landscape. The lyrics were in keeping with that spirit.

However, the lyrics known and sung today are attributed to Manuel Fernández Juncos per the request of the new Commonwealth, as Lola’s were yet again deemed too revolutionary.