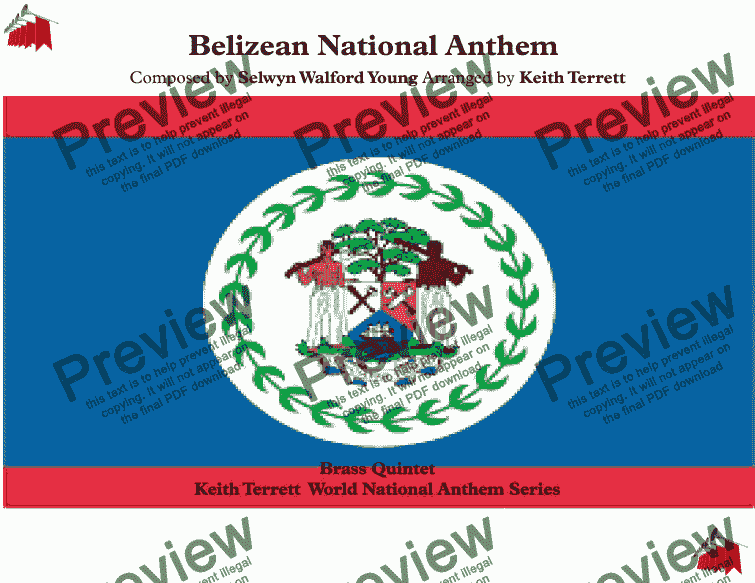 The national anthem of Belize arranged for classical Brass Quintet.

Land of the Free is the national anthem of Belize. The words were written by Samuel Alfred Haynes and the music by Selwyn Walford Young in 1963. It was officially adopted in 1981.

Haynes participated in World War I as part of the colonial effort for Great Britain and encountered much abuse and ridicule along with his fellow workers. On his return to Belize he became a part of workers’ movements in Belize and is readily identified with the 1919 Ex-Servicemen’s Riot that began on July 22. After that riot was suppressed, Haynes began organizing Belize’s branch of the Universal Negro Improvement Association (UNIA) and facilitated the visit of its head Marcus Garvey of Jamaica. Garvey recruited Haynes to work with him in the U.S., a move that rendered the UNIA in Belize leaderless for much of the 1920s and that indirectly contributed to the Isaiah Morter controversy. Haynes most likely wrote the anthem as an answer to colonialism’s stifling of Belizeans’ identity. The lofty language and uplifting lyrics referenced Belize’s former status as a slave society indebted to profits from forestry, cleverly linking it to the end of Belize’s colonial period, a process that culminated on September 21, 1981. The song was originally titled "Land of the Gods", a salute to the proliferation of organized religion in Belize.

Exalting by the PUP:

With the arrival of the nationalist movement led by the People’s United Party, the search was on for new symbols of Belizean identity. The PUP had defied the colonial order by singing "God Bless America" instead of the royal anthem "God Save the King" (or Queen). At independence, the ruling PUP named the anthem Belize’s official one and played it at emotional independence ceremonies on September 21. Most Belizeans agreed with the choice but lamented that it had not been put to a vote of Belizean residents.

The anthem has come under fire from critics who charge that its language is archaic and does not appeal to a new generation of Belizeans who are in any case too young to remember Samuel Haynes. Some women have argued that the anthem is male-centric; witness the second line, "Our manhood we pledge to thy liberty," and the chorus’ images of war, a mostly male occupation. Nationalist writers have argued that references to the Baymen are too slighting of the multi-ethnicity of Belize today and have proposed a number of replacements. The most recent complaint of this nature was leveled by Maya-Mestizo born correspondent Clinton Luna, who suggested that the phrase "sons of the Belizean soil" should replace "sons’ of the Baymen’s clan" in the chorus in recent issues of the Amandala weekly newspaper. The newspaper itself has previously argued to the same effect. However, Amandala contributor Henry Gordon countered in a later issue that nothing in the anthem represents any sort of bias to any ethnic group in Belize.

Some have argued for the striking down of "Land of the Free" and its replacement by more modern songs. This line of attack has subsided somewhat as more Belizeans have grown used to the anthem.

Late former Prime Minister George Price toured the nation sometime in the early 2000s to promote the singing of the national anthem. He visited schools in rural areas and led children in singing the anthem. National radio stations generally play a version of the national anthem at morning sign-on. Most feature a recording of Price singing the anthem at piano in a faster tempo than usual or an instrumental version. In author Zee Edgell’s Beka Lamb, the title character and her friend Toycie Qualo sing the full version of the original song, Land of the Gods (of which the two opening and closing lines are mentioned in the story), while parodying the political meetings then being held by the PIP, a reference to the PUP, in Belize City. Edgell acknowledged permission to use the song at the front of the book. The anthem was prominently featured in demonstrations in Belize in 2005. Belizeans normally stand at attention facing forward, headgear off, while singing or facing someone singing the national anthem. 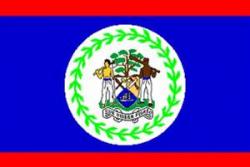