By: Composed:Lemuel McPherson Chistian (1917-2000) Arranged by Keith Terrett
For: Brass quintet
This music is in your basket
View basket
Loading... 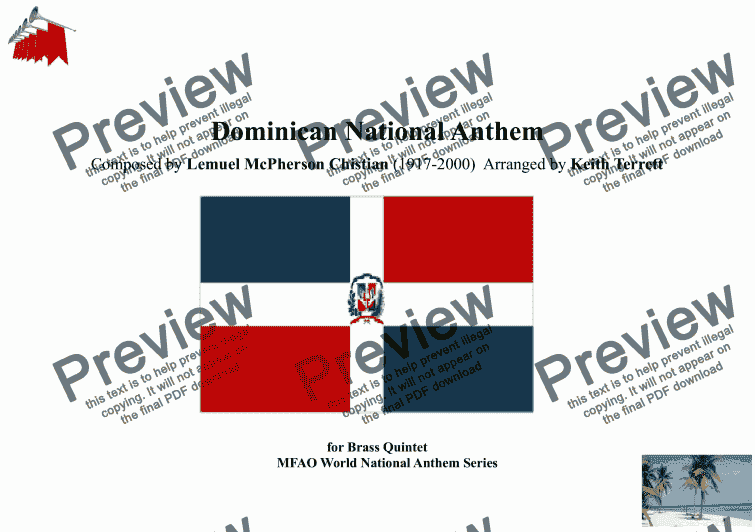 Composer
Composed:Lemuel McPherson Chistian (1917-2000) Arranged by Keith Terrett
Arranger
Keith Terrett
Publisher
Music for all Occasions
Difficulty
Moderate (Grades 4-6)
Duration
1 minute
Genre
World music
License details
For anything not permitted by the above licence then you should contact the publisher first to obtain permission.

An arrangement for classical Brass Quintet of the national anthem of Dominica.

Adopted unofficially upon achieving statehood in 1967, the national song became the national anthem upon 1978 independence.

"Isle of Beauty, Isle of Splendour" is the popular title for the national anthem of the Commonwealth of Dominica.[1] It was adopted upon the island gaining statehood in 1967 and again with Dominica’s independence in 1978. The lyrics are by Wilfred Oscar Morgan Pond (1912-1985) and the music was composed by Lemuel McPherson Christian OBE (1917-2000).

Dominica (/ˌdɒmɪˈniːkə/ DOM-i-NEE-kə;[4][5] French: Dominique; Island Carib: Wai‘tu kubuli), officially the Commonwealth of Dominica, is an island country in the Lesser Antilles region of the Caribbean Sea, south-southeast of Guadeloupe and northwest of Martinique. Its size is 750 square kilometres (290 sq mi) and the highest point in the country is Morne Diablotins, which has an elevation of 1,447 metres (4,747 ft). The Commonwealth of Dominica had a population of 72,301 at the 2014 Census. The capital is Roseau, located on the leeward side of the island.