A Symphony for Concert Band

By: Ralph Vaughan Williams
For: Concert band / wind band
This music is in your basket
View basket
Loading... 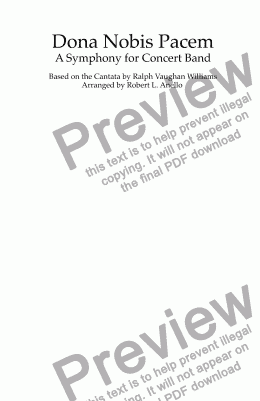 A Symphony for Concert Band

Vaughn Williams wrote Dona Nobis Pacem (Latin for “Grant Us Peace”) in 1936 as a cantata for soloists, chorus and a large orchestra. Alarmed by the rise of fascism and the likelihood of another European war, Vaughn Williams made illusions to the experience of recent wars–-drawing on the experiences of soldiers and statesmen in the lead-up and conduct of what we know as World War I–-using those recollections to warn against the horrors of a new war, which unfortunately would erupt in just under three years. The original choral lyrics draw from the Agnus Dei and Gloria sections of the Christian Mass, poems by Walt Whitman, a speech against the Crimean War by British pacifist John Bright and various Biblical quotations concerning war and peace.

The oboe introduces the main theme which is used throughout the composition, notably as a musical bridge between the movements. Each movement musically portrays a different aspect of war from the first movement which depicts the tenuous time before the war to the final movement that heralds the cessation of hostilities and glories in the reconciliation of the parties.

This arrangement is in five, contiguous movements, bridged by oboe solos:

I. A Fragile Peace (Lento)

Note: If you buy this version of the "Dona Nobis Pacem" score, you will receive a PDF of 8-1/2 x 11 sheets that you will need to print and bind yourself. Please also note that the score presented on ScoreExchange is not the actual Conductor’s Score; it is my working score. The actual Conductor’s Score is found in the part "Conductor’s Score." For instructions on how to receive a PDF in ledger or A3 size for printing two-sided on ledger paper (this score needs to be trimmed to 9"x12" and bound), contact me via: robertanello.wix.com/robertanellomusic. To purchase a 9" x 12" comb-bound conductor’s score and assembled parts, go to: http://robertanello.wix.com/robertanellomusic.

To hear this work or view a performance of it, go to http://robertanello.wix.com/robertanellomusic.

Sorry, there's no reviews of this score yet. Please .
In order to submit this score to ScoreExchange.com Robert Anello, MSA has declared that they own the copyright to this work in its entirety or that they have been granted permission from the copyright holder to use their work. If you believe that this score should be not available here because it infringes your or someone elses copyright, please report this score using the copyright abuse form.