By: Composed by Wannakuwattaaduge Don Amaradeva Arr:Keith Terrett
For: Brass quintet
This music is in your basket
View basket
Loading... 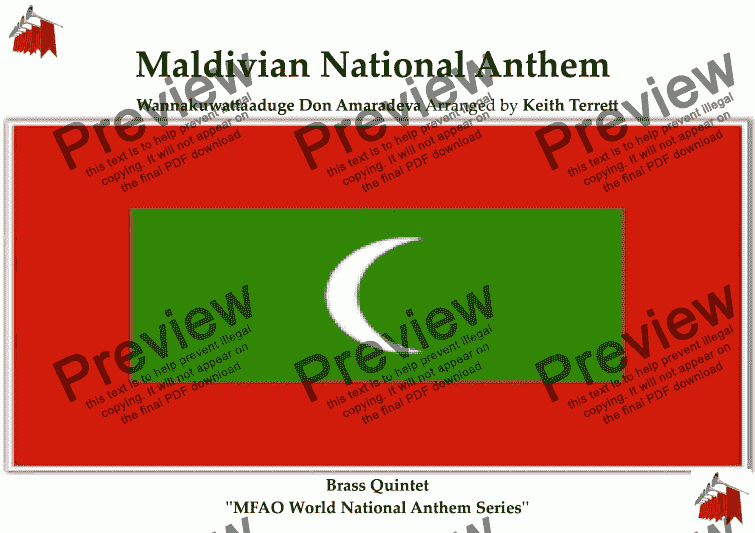 Composer
Composed by Wannakuwattaaduge Don Amaradeva Arr:Keith Terrett
Arranger
Keith Terrett
Publisher
Music for all Occasions
Difficulty
Moderate (Grades 4-6)
Duration
2 minutes
Genre
World music
License details
For anything not permitted by the above licence then you should contact the publisher first to obtain permission.

An arrangement of "Qaumii Salaam" for classical Brass Quintet.

"Qaumii Salaam" (Maldivian: ޤައުމީ ސަލާމް; National Salute) is the current national anthem of the Maldives. The lyrics were written by Muhammad Jameel Didi in 1948, and the melody was composed by Sri Lankan maestro Pandith Amaradev in 1972.

"Qaumii Salaam" is a declaration of national unity, the country’s Islamic faith, the victory of historic battles and an homage to the heroes who fell defending the nation. It also wishes further development on the country, while paying respect to the leaders who had served her.

Until 1948, a melody without lyrics called the "Salaamathi" was performed by a royal band on state occasions at the Etherekoilu, the residence of the Sultan. Soon after it was decided that the Salaamathi needed lyrics accompanied by a new melody. The lyrics were written by a young poet and later chief justice, Mohamed Jameel Didi.

Jameel Didi wrote the words for the new "Salaamathi" bearing in mind the influence of Urdu poetry during the time, closely imitating its style and also furnishing his work with words borrowed from Arabic. Afterwards, Jameel Didi began looking for a tune to accompany his poem when he heard the noon chime (Auld Lang Syne) of his uncle’s clock. The tune was adopted to the lyrics and the new "Salaamathi" was complete.

Throughout the 1950s and 1960s, Maldivians became more aware of the importance of a national anthem and in 1972, shortly before the Maldives was visited by Queen Elizabeth II of the United Kingdom, the government hastily commissioned Sri Lankan maestro W. D. Amaradeva for a new melody for the anthem. The original lyrics were retained, with a few changes to emphasize the fact that Maldives has been a republic since 1968. As of 2013, this version of the anthem has survived without any modifications.