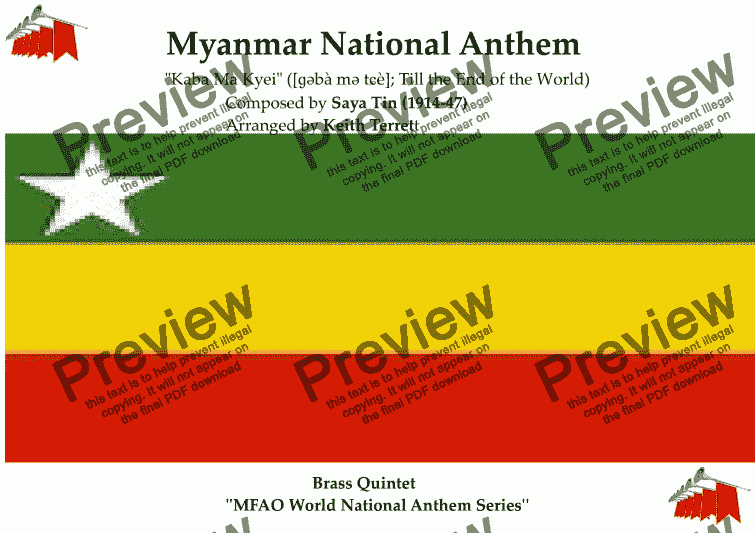 An arrangement of the national anthem of Myanmar for classical Brass Quintet.

In 1930, Saya Tin was a member of the “Dobama Asiayone” (“We Burmans”) group that was a Burmese nationalist group against the controlling British government. He composed the song “Kaba Ma Kyei” as the party song and first performed it on July 20, 1930. Tin was promptly arrested for inciting rebellion and was jailed until 1946. Meanwhile, the song became a national symbol during British rule and then the Japanese occupation.

In 1947, before independence, a committee was formed to select proposals for the future flag, coat of arms and national anthem. Saya Tin became a member of this committee in July 1947. It was decided to adopt Tin’s composition with some slight changes of the text. On 22nd September 1947, another correction of the text was done and this version became official upon independence in 1948. (A slight change was also made to the words, presumably in 1988, when the name of the country was changed to Myanmar).

Two versions of the anthem exist, a short one when played internationally, and a longer one that adds a more Burmese type of music to the beginning of the piece that is performed domestically. There is also an interesting custom associated with the national anthem, and that is that singers who sing the anthem must give a small bow upon the conclusion of their singing, as a sign of respect for the anthem and the nation. 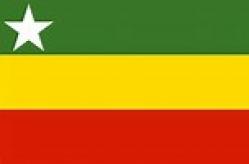