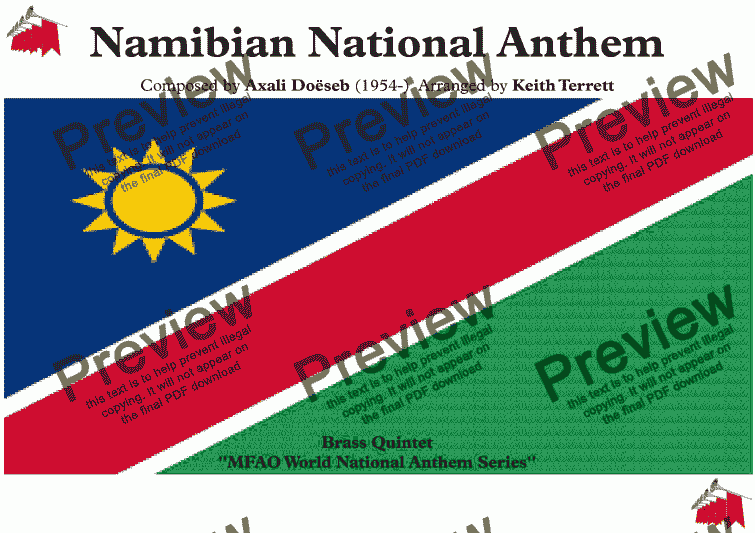 An arrangement of the national anthem of Namibia arranged for classical Brass Quintet.

"Namibia, Land of the Brave" is the national anthem of Namibia. The anthem was written by Axali Doëseb, who was the director of a traditional music group from the Kalahari desert. Doëseb was chosen to write the anthem after winning a contest held after Namibia became independent in 1990.

Namibia’s first anthem, albeit unofficial, was "Das Südwesterlied" while under German colonization as German South West Africa. When it became South-West Africa as a League of Nations mandate under the Union of South Africa, the national anthem was changed to "Die Stem van Suid-Afrika" to match South Africa’s. Following independence, "Nkosi Sikelel’ iAfrika" was provisionally adopted as the national anthem. It was later decided that Namibia needed a unique anthem and a national competition was held to compose a new national anthem. The competition was won by Axali Doeseb with "Namibia, Land of the Brave". The anthem was first played in public in a ceremony on the first anniversary of Namibia’s independence from South Africa in 1991. The similarity of the lyric’s first-line phrase "Land of the Brave" to the end of "The Star-Spangled Banner", the national anthem of the United States, has been noted.

The Parliament of Namibia passed the National Anthem of the Republic of Namibia Act, 1991. This confirmed "Namibia, Land of the Brave" as the national anthem of Namibia, made it an offense to insult the anthem with punishment upon conviction of up to five years imprisonment or up to a R20,000 fine or both, and allowed the President of Namibia to create regulations relating to it. 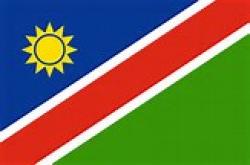