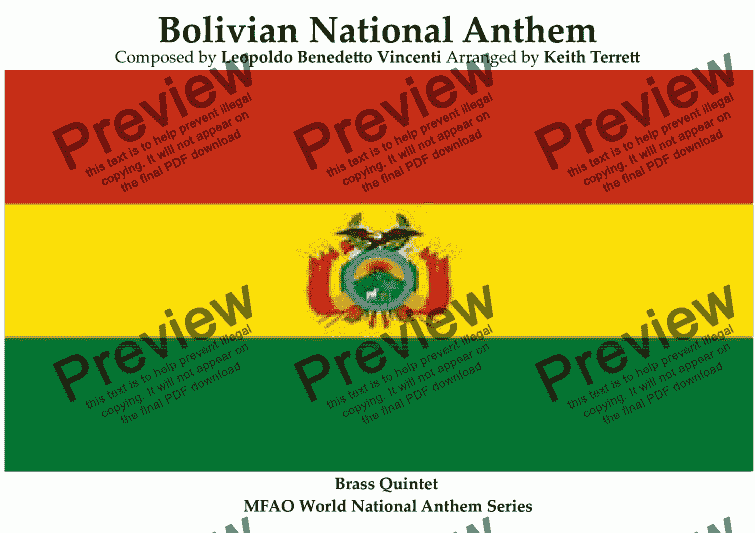 The national anthem of Boliva arranged for Brass Quintet.

The national anthem of Bolivia (Himno Nacional de Bolivia), also known as Bolivianos, el Hado Propicio (Bolivians, a most Favorable Destiny) was adopted in 1851. José Ignacio de Sanjinés, a signer of both the Bolivian Declaration of Independence and the first Bolivian Constitution, wrote the lyrics. The music was composed by an Italian, Leopoldo Benedetto Vincenti.

This last line "Morir antes que esclavos vivir!" means "To die before living as slaves". Bolivians would rather die than be slaves to the Spaniards or anyone else. I guess everyone pretty much feels that way. Anyhow now it’s Bolivia’s NATIONAL MOTTO.

Latin American epic anthems: Possibly the easiest to identify, these are found in Latin American (Spanish-speaking Central and South America) countries and tend to be rather long, have an epic quality in the music, often containing both a quick, patriotic section of music, and a slower, stately part, and consists of many verses, usually chronicling the history of the country. Many are also composed by Italians (or other Europeans). They also tend to have a similar history in that they are usually written for another piece of music, but later the music is replaced but the original words are kept. In many cases, all the verses are official and, whether or not all verses are often sung in the country or not, children are expected to memorize the entire anthem in school in some of these countries. Examples include Argentina, Ecuador, El Salvador, Honduras, and Uruguay. 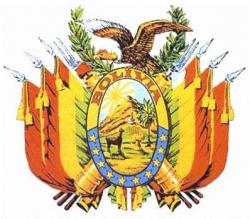 Another great arrangement of an epic anthem by Keith Terrett.

The Bolivian NA has great harmony, dynamics and orchestration; fantastic arrangements of all the world's national anthems are in store for Brass Quintet, String Orchestra & full Symphony Orchestra.

Kudos to you Mr Terrett.