By: Composed by Charles Austin Miles (1868-1946) Arr:Keith Terrett
For: Brass quintet
This music is in your basket
View basket
Loading... 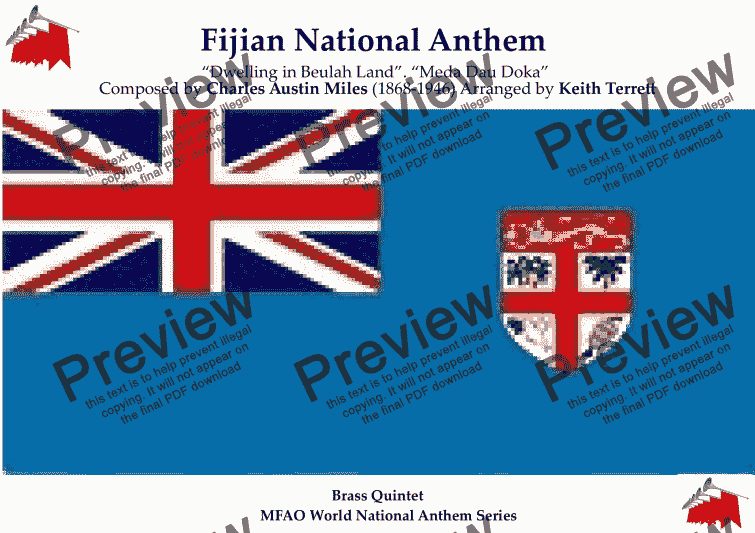 Composer
Composed by Charles Austin Miles (1868-1946) Arr:Keith Terrett
Arranger
Keith Terrett
Publisher
Music for all Occasions
Difficulty
Easy (Grades 1-3)
Duration
2 minutes
Genre
World music
License details
For anything not permitted by the above licence then you should contact the publisher first to obtain permission.

An arrangement for classical Brass Quintet, of the national anthem of Fiji.

The melody of “God Bless Fiji” was adapted from a hymn by C. Austin Miles entitled “Dwelling in Beulah Land”. The lyrics were then written by Michael Francis Alexander Prescott to the tune and won first prize in a nationwide contest before independence in October 1970.

The Fijian words, while official, are rarely sung, the English version is much more common. The English and Fijian lyrics are also different in meaning, the lyrics on this page give both the official English lyrics and the English translation of the Fijian lyrics, as well as the Fijian lyrics themselves. The third most common ethnic group on the islands are Indo-Fijians and it was proposed in 2008 that the national anthem be in the three primary languages of the country: English, Fijian, and Hindi.